Not to make this post a rant about exams, but the first part of this week wasn't great overall, as could be expected with finals coming up. Luckily, by the end of the week things improved a bit. Lots and lots of work, projects, and assignments. Sometimes the work is enjoyable, and I'm not complaining, because this work is what I'm here to be doing, but objectively speaking, it was pretty difficult. If I had a more optimistic outlook than I currently do, I would call this week a "learning experience." I guess that's what the college experience is about, so I guess I'll try to find some sort of life lesson to come from it. I think it's important sometimes to remember the low points and as well the high points of college life, especially in a blog like this that I can look back on later.

Oh, and sorry if you came to this post expecting more fun adventure photos.Those are toward the bottom of the post.

I'm trying to learn how to deal with failure. In high school, I tended to think of myself as being ahead of the curve, high-achieving, all the things they told the AP students about how bright our futures were. As a result, I don't think I ever truly learned to keep going even when I failed at something, or how to cope when I lacked aptitude at something compared to people around me. If I wasn't successful at something, I generally avoided doing it or stopped enjoying it. It was easier to fall back on comfort-zone things like music and biology to reassure myself.

Most of the problem with this week was prepping for a physics exam that was particularly difficult. I could make a lot of excuses about why my score on it was lower than it should have been, but honestly there's no one to blame for it but myself. I had never really failed a major exam before, but I guess I can check that off my bucket list. I underestimated the time I would need to prepare for it, I made the poor decision of scheduling the Oman trip too close to the exam, I didn't ask questions as early as I should have, and I didn't expect my weekly schedule to fill up full of random meetings and activities that took up my time. It wasn't for lack of trying, though. I honestly feel like I did everything I could, given the circumstances, to learn the material. I had plenty of help and resources, but the more I read the material or the more times I got people to explain it to me, the less I understood it.

Something I was always really afraid of in high school was that if I somehow let people down, if I didn't actually turn out to be as good at things as people supposedly thought I was, that people would reject me because of it. My self-worth was sometimes too closely tied to how successful I felt I was compared to other people. Actually though, I think the people that know the most about my failures are typically people that I have the strongest friendships with. Luckily, here I've had some really awesome friends who went out of their way to help when I needed it.

Now I've come to a place where I'm not necessarily ahead of the curve--in this small, competitive school I'm quite painfully average at a lot of things, and the consequence of challenging myself is that I'm going to experience failure, a lot. I'm trying to learn how to "fail" at some things without labeling myself as a "failure", which is honestly pretty difficult.

That being said, this week definitely improved as the weekend approached. I got to volunteer as a peer ambassador at NYUAD's Candidate Weekend event, where the university invites applicants who are considered "finalists" for a weekend of learning more about NYUAD and experiencing Abu Dhabi, while doing some final interviews and assessments. I can't believe it has been a year since my candidate weekend- it made me realize how much I've learned and changed in that time. It was so much fun reliving the memories of candidate weekend, and this time I didn't have to deal with jet lag or the stress of being evaluated :)

Most of my responsibilities involved being in charge of a group of 11 students from around the world, getting to know them, answering their questions, sharing my experience, and making sure they didn't get lost as we went to all of the different activities. The mornings involved things like seminars, sample classes, campus tour, presentations from different campus departments, etc. The first evening was a trip to the desert sand dunes and the Grand Mosque, and the second evening was a city tour (to the date souk, the beach near Heritage Village, and Umm al Emarat Family Park), and a farewell dinner. So much nostalgia/memories from my Candidate Weekend.


It was so much fun to get to know the students and feel their excitement and energy- it brought me back to the initial excitement I had when I first came here and everything was so new and interesting.
This is the first time I've seen this many clouds since coming here- we haven't had a single instance of rain since I arrived in August.


Just for fun, here are a few flashback pictures from my candidate weekend one year ago! This is where it all began... 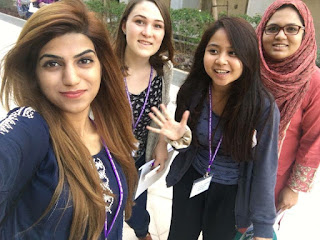 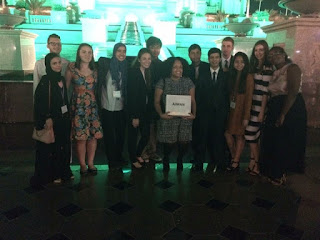 Anyway, hope you all are healthy, happy, and getting ready for the holidays!