Not too much to write about this week, but I thought I'd check in anyway for the sake of routine. Apparently Northern California is getting pounded by rain this week, so stay safe everyone! I'm hoping that it will relieve the drought somewhat. I couldn't help but laugh bitterly at the irony of going from drought to flash flood warnings in the span of a few months. Hopefully it will bring a nice green spring/summer!
In Abu Dhabi, it hasn't rained even once since I got here: no weather whatsoever. Temperatures are still in low 20s Celsius/ 70s Fahrenheit. 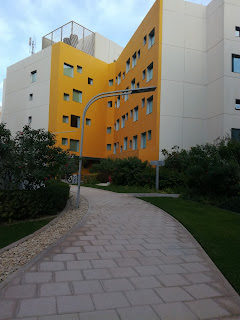 In my Design and Innovation class, we had a robot battle! The idea was to make low-tech, funny robots (no 3D printing, no hot glue, no laser cutter), and they had to be controlled by wearable technology. We made sensors with conductive fabric and thread. Who knew my limited sewing skills would be so useful in an engineering class? In the case of a tie, the battle winner was chosen by the audience, so the idea was to make them as funny as possible using found items.
My group made this. It's controlled by the skirt pictured in the background. 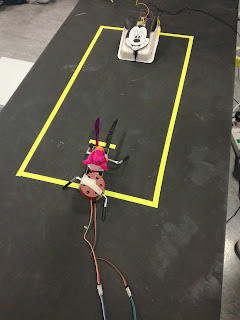 Unfortunately, we only had one day to build the robot and didn't get enough time to test it, so it immediately ran sideways out of the arena and was disqualified. But we still had a lot of fun cheering for the other robots! 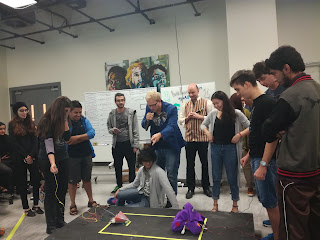 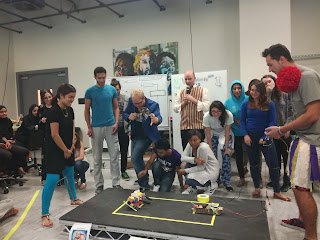 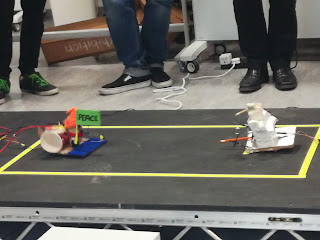 Another fun thing that happened was that the Ivory Coast and Uganda national football (soccer) teams came to play a friendly match at our campus. I don't really follow football, but it was fun to watch. A whole bunch of people came from off-campus to cheer, and there was so much energy in the stands. Ivory Coast won 3-0. 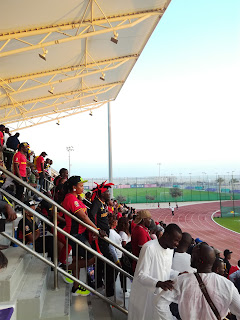 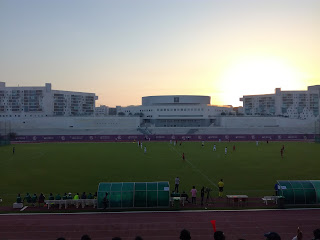 In Design and Innovation, we watched a documentary on design called "Objectified". It's crazy to think how much effort and experimentation goes into creating the everyday objects all around us. All of a sudden, when I look at chairs and toothbrushes and cups, I see the little ergonomic curves and think of the person who designed the object in AutoCAD at some point...

We're working on a final project related to "smart home" furniture items, and my group was assigned to modify a coffee table. We've been spending a LOT of time brainstorming. We've made posters, storyboards, whiteboards covered in marker, etc. and scoured the internet for everything there is to know about coffee tables. My goodness, I never want to look at a coffee table again. More details to come in next week's post once we finish it.

Other than academic things, I've mostly been hanging out here, watching movies/playing card games with friends, reading books, and practicing piano. At least it's nice not having readings, essays, or other homework-- just the project. I want to get off campus more and explore, but that probably won't happen until after I finish it.
Hope you all have a great week!