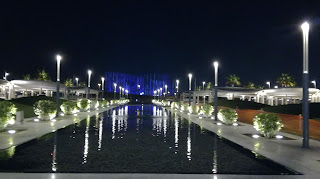 This week, I've been thinking a lot about the value of conversations. I think that for most of my life, I really underestimated the value of connecting with people and hearing their stories. I've tried to make it a priority, and I feel like I learn so much from people whenever I do. I've been especially lucky this week to have a lot of honest one-on-one discussions with people, about life, personal values, worries, future plans, etc. For example, in my Engineering Ethics class, we had a lesson on ethnography / cultural studies, which focused on techniques for interviewing people, and we had to practice interviewing our classmates. To be honest, it was really awkward at first, but by the end I learned a lot from conversations with people who I hadn't really talked with on a personal level before. I think it really pays off to be able to dig deeper and go beyond the surface-level small talk.

A few random things I've been thinking about lately:
1. No one really knows what they're doing in life, no matter how much they pretend like they do. Everyone's living life for the first time and figuring it out as they go along.
2. Even people who do have one firm passion/goal/purpose in life don't always feel confident in pursuing it.
3. People who value you will generally make time for you when it counts. Most of the time, there's no such thing as "not having time" for something. Not having time for something usually means that you don't find it important enough to bother with compared to the other things you are doing.
4. One of the best yet worst things about college is the lack of separation between school life and home life. Sometimes it's awesome to have friends around everywhere and community events with the same people from classes, but other times it's a little bit suffocating. It's good to find time to be alone.

We had a crazy thunderstorm last night out of nowhere. I woke up at 4 a.m. to a huge thunderclap, and my roommate was awake too, so I know it wasn't just me. I listened to the rain for a while before falling back asleep. My roommate talked to one of the security guards who has lived in AD for several years, and he said this was one of the worst thunderstorms he has seen here.

In swim class, we're mostly working hard on butterfly technique. I'm glad I took this class but sometimes it's a little crazy because I have a class immediately before it, and so I only have 10 minutes between classes to run down 4 flights of stairs to the pool, sign in, change into my swim clothes, shower, stretch, and get in the pool. The nice thing about swimming, though, is that it's a good distraction away from technology and life commitments. Everything's quieter underwater and there's no point in thinking about emails and urgent text messages, because you can't get to them until after the workout anyway. In chemistry we're doing reaction mechanisms and equilibrium. In lab this week, we did thin-layer chromatography and finished up the titrations from last week using the aspirin samples we synthesized. I have a chemistry exam tomorrow. In physics, we're covering concepts related to electric fields and magnetism. In my writing seminar "Time", we looked at different timelines and historical charts used in the past few centuries, and we're writing our first major essay, which is a film/novel analysis paper.

I stopped by Yas Mall with a friend to get some shoes, paper, and pencils, and ended up getting Baskin Robbins ice cream and wandering around for a while. It's definitely possible to get lost inside these malls, no matter how many times I go. Thank goodness for those touch-screen interactive mall map kiosks or I would never find anything.

I was really lucky to be able to go volunteer with the ADvocacy student interest group at one of the labor camps, which are these large housing complexes where foreign workers live. I got to meet some awesome ladies from the Phillippines and Nepal. We played volleyball for a bit, until one of us accidentally hit the ball over the fence, haha. After that, we played card games and just sat and talked and laughed. A few of the ladies I talked to had just arrived in Abu Dhabi this week. One of them showed us a baby bird that she found, which they now keep as a pet, and it is tame enough to hold and stroke its feathers! It was such a sweet moment. Before learning about the U.A.E., I would never have guessed that Tagalog would be such a useful language here, and now I constantly find myself wishing I spoke it at least a little bit. Maybe one of these days I will make time to study a few phrases.

Another thing I did this week was attend the StartAD Arduino workshop, which was a few fun hours of building circuits and playing around with LEDs and sensors. I'm glad I went, even though I'm mostly just glad I got a free Arduino kit to take home. StartAD is this NYUAD initiative to encourage entrepreneurship in the region, and so they have a lot of skill-building workshops and resources related to startups, and anyone can come participate. 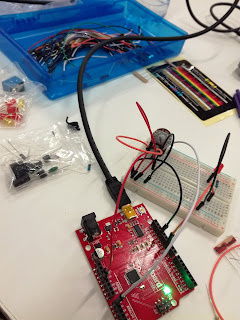 
Anyway, hope you all stay happy and healthy!