I've been thinking lately about the power of mediocre talents. You know, we're always told to idolize the people who are at the top of their field, and probably rightfully so. These people deserve awards and recognition for their hard work and training. It's good to strive for excellence and work toward goals and develop one's skill set as much as possible, and one day I hope to be at the top of my field in the career I choose. But sometimes I think that people become so afraid to share the things they can do because it doesn't measure up to some arbitrary standard of perfection. There are so many unsung heroes who make the world a better place with their mediocre talents.

I'm talking about the people who sing off-key in public and aren't afraid to laugh at themselves. The parents who can't cook a gourmet dinner but feed their children simple and nutritious food every day. The students who will never pursue a career in art but still draw stick figure cartoons in the margins of their notes. The people who are only fluent in one language but know a few phrases in 4 or 5 and aren't afraid to try them out. The people who practice a musical instrument every day but perform with a few wrong notes. The people who are terrified of public speaking but still get up and stumble their way through presentations because they have important ideas to share.

You make life better. The world needs you and your contributions.
I find that most people are a lot more extraordinary than they think they are.
Okay, now after that cheesy dose of positivity, let's discuss the week:

Classes are going fairly well, even though we're sort of getting to that point in the semester where work is increasing and everything's just kind of tiring. Biology lectures this week were really engaging though. In my Time writing seminar, we had a workshop on presentation skills/ speaking skills in preparation for our final end-of-year presentations. Multivariable calculus is doing cylindrical coordinates and double/triple integrals, mostly things I've seen before. I'm still working as an intern for the admissions office, and I gave a fun campus tour this week. It's that time of year when a lot of people are starting to visit the campus and call with questions before next application cycle opens in the fall.

Because of the Friday-Saturday weekends here and Easter Sunday tomorrow being a class day, I felt like I had to do something to celebrate the holiday. So this weekend I went shopping, invited a bunch of people, went all-out American, and made pretty much all the foods I've been missing from home. Thanks to everyone who let me borrow cooking stuff and helped with the preparation- you guys are lifesavers! My parents probably think I don't know how to cook, but I think this weekend I proved them wrong. I made lemon and basil roasted chicken, mac 'n' cheese, vegetable chili, and salad, enough to feed 15 people! Then for dessert we had cinnamon rolls from the Pillsbury dough. This was so much fun, because some of my friends had never had foods like ranch dressing, chili, or cinnamon rolls-- foods that I sort of take for granted. 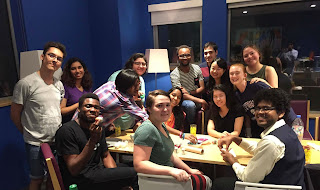 Dyeing eggs was even more fun to explain. I guess there is more to American culture than I realized, and it felt good to be the one sharing my traditions for once. I couldn't find any Easter egg dye kits in the stores (although there was a lot of Easter candy) so we improvised with food colouring and it definitely worked although it got a bit messy! 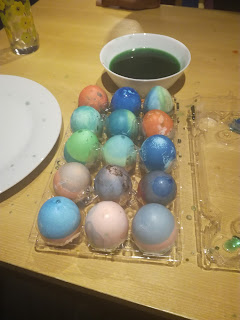 At the risk of sounding really sappy, I have the most amazing classmates. They are pretty much my second family and I'm so thankful to them for celebrating with me and making it feel like home away from home.

I'm currently listening to random 1980s rock music for no apparent reason other than nostalgia. 80s music is so associated with childhood road trips... On the topic of decades, is it close enough to the 20s again to bring back short bob hair? Probably not, but that's the direction my hair is heading whether I like it or not. Although knowing me I'll probably end up looking like Johnny Depp in Charlie and the Chocolate factory, haha. No regrets though. Short hair is so much easier to deal with.

Anyway, today I spent most of the day writing an essay, and tomorrow I have a chemistry exam so wish me luck! We also had an event in the A2 residence buildings where the RA's (Residential Assistants) on every floor set out food from their home countries, so we roamed around from floor to floor collecting everything from cheesecake to gulab jamun to seaweed. The biryani floor was the best, hands down :)

Hope you are all happy and healthy.
Goodnight from Saadiyat Island,