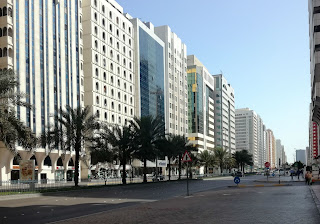 Another week of freshman year has flown by. The weather is warm and dry (surprise, surprise, we're in a desert).

For my Time writing seminar, we're doing a project where we have to make a "cartography of time"- basically a timeline or any visual representation of time related to a topic of our choice. I'm making a word collage timeline of American English slang, neologisms, and cultural/political "buzzwords" from the 1900s to the present. It has been so much fun going through the internet and digging up all the random internet slang from 5 to 10 years ago that no one uses anymore. (Remember when people said "epic fail" and "what a noob" all the time? Ah, the joys of middle school...) It's also interesting how the words invented in a certain time period tend to capture the social and political trends of that era. So yes, if you're reading this and you happen to have any really interesting American slang from pre-2000s decades that I might not be so familiar with, send it my way!

Other than classes, I've mostly been spending time doing homework in the floor lounge pillow fort, the library, and the engineering design studio.

The NYUAD Institute of research hosts academic speakers fairly often, and on Thursday I went to an interesting talk from Dr. Merrie Ringel Morris, a Microsoft researcher who got her PhD from Stanford. Her research focuses on incorporating new expressive capabilities into eye-gaze-controlled communication devices for ALS patients. The devices on the market right now are very slow, monotone text-to-speech devices that use eye trackers to select a letter when the person looks at it for a certain amount of time. Dr. Morris' research is exploring making the computerized voice more expressive and customizable, using emoji buttons to add non-speech vocalizations like laughter and sighing, for instance, or adding an option to change which words in the sentence are pronounced with emphasis. Her research also finds ways to make typing faster, with "cascading" delay times- making letters that are more likely to be correct take less time to select, while unlikely letter combinations take more time to select. This reduces errors in typing and increases the number of words per minute a person can type. Fields like this are so interesting- it's such an ideal overlap between biology/neuroscience, engineering/computer science, and social impact. I'm so glad that I took the time to go. After the talk, we had some time to ask questions, and she gave me really helpful advice related to careers in bioengineering research. 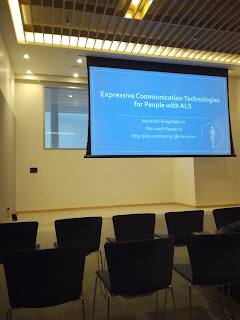 My classmate's family came to visit Abu Dhabi this week from the U.S., so the usual group went out for Korean food with his family. We sat on the floor on mats and cooked the beef strips on the burners in the middle of the low table. Among other things, we had spicy hotpot soup, ramen noodles, kimchi pancakes, stir fry, and the Korean version of sushi, which had cooked beef instead of fish inside the roll. After we got back, we played card games until we were all laughing hysterically at nothing in particular.

I also went exploring in the city for a bit. I needed a haircut and a few shopping items, so I ended up walking around for longer than I probably needed to, but at least this way I'm getting more familiar with the layout of the city on foot. I found this little hair salon in the city that was way cheaper than the one on campus (thanks to Groupon deals, haha). I met this really sweet Algerian lady who trimmed my hair. Hair salons in the U.A.E. are all separated by gender, which makes sense but is something that's different from the U.S. and is probably worth mentioning since it was something I wondered about before coming here. The ladies-only salons usually have a partition between the waiting area and the haircut area, and the windows are glazed over so people can't see in. Also, as I've mentioned once before, a disproportionate number of them have signs saying "saloon" instead of "salon", which always makes me smile. Anyway, one of my favorite things about the city is the way that there are clusters of tall buildings with beautiful mosques and open flat spaces interspersed between them, so it doesn't feel too crowded but it feels just busy enough to feel like a "big city". It's generally very clean and fairly pedestrian-friendly. It was nice to walk around. 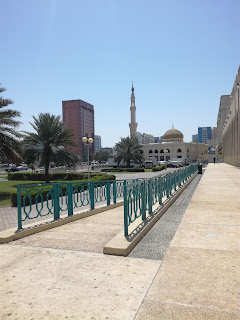 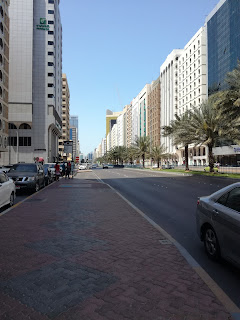 Anyway, hope you all have a great week.