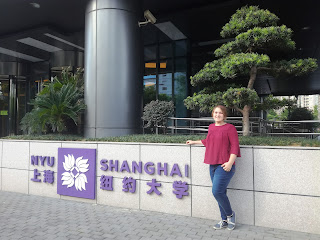 I've been here for 3 days, and I've already experienced so many new things. With a population of around 25 million, Shanghai is a bit overwhelming at first in its enormity, but I'm starting to figure out how to navigate the public transportation systems like the metro, buses, and taxis. The more I start to find my way, the more I'm growing to love the city and the country. The past few days have mostly been unpacking, getting settled, attending information sessions at the university, and buying everything I need for the apartment.


I'm living on the 14th floor of a building where many of the other NYU Shanghai students live. It's a nice area with a shopping center right across the street and access to bus and metro stations close by. It is about a 25-minute shuttle bus ride from my apartment to campus. There are 6 of us in a 3-bedroom apartment with a kitchen and a spacious living room, so it's not too crowded, especially by Chinese standards. Four of my close friends from the Abu Dhabi campus are here, and two of them (from Kazakhstan and Jordan) live in my apartment, so spending time with them and having their familiarity in this different environment has been such a blessing. My lovely roommate, Meiqi, is Chinese and has been a huge help in translating and explaining things.


The vast majority of the "study away" students here are from NYU New York, (while I'm from NYU Abu Dhabi), so the orientation information sessions felt a bit strange because there were so many Americans. There's nothing wrong with that, but it felt like being in high school again, because my whole college experience so far has been international and I wasn't expecting to come all this way only to spend the first few days surrounded by other Americans and the American college student culture. As soon as classes start tomorrow though, we'll be joining the main student body, which is 50% Chinese and has many more countries represented. I'm looking forward to meeting them and learning from the other international students.

The most difficult part about being here is DEFINITELY the language barrier. Very few people outside the university speak English, and my Mandarin knowledge is quite limited. I studied some basic vocabulary over the summer, so I know enough to get around with a lot of Google Translate and hand gestures, but it's extremely frustrating not always being able to ask detailed questions, understand what people want from me, or read important materials like product labels, restaurant menus, receipts, etc. I have to get around by carrying a card or phone screenshot with the address of where I want to go written in Chinese to show the taxi driver. Some written materials are also in English, but some aren't. This is why I accidentally purchased hand soap instead of lotion, because I couldn't read the label and it looked the same, haha. I'm trying to take things like this as motivation to study the language more.

I'm hoping this will turn into a good thing, as the constant immersion will help me to build fluency faster than I otherwise would. People here also sometimes speak Shanghainese which I'm told is quite different from Mandarin. I really have no idea how to tell the two apart.

Here are some general observations and first impressions of Shanghai so far:
I thought Shanghai would feel crowded, but the parts I've seen so far haven't been much busier than any other major city. The traffic moves along fairly well in the parts I've been to. The sidewalks are very wide to accommodate pedestrians, which makes the city easy to walk around. I like how, unlike in Abu Dhabi, the campus in Shanghai is in the heart of the city. There's so much to do and see.


Bikes and motorbikes are really popular here, and there are separate bike paths on many of the streets. There are bike share systems where you can scan to pay and take a bike for a certain amount of time, and that's probably the easiest way to get around.

The pollution hasn't been as bad as I thought it would be, although I'm told it depends on the day and how the winds are blowing. I always associated China with those pictures of people wearing those air filtration masks, but from what I've seen so far, not very many people wear them here.

The weather has been mild (around 26 C/ 80 F), very humid, and overcast. We got some light rain earlier today.

Mobile payment is extremely popular here and cash is rarely used. People can attach their bank account to apps that allow you to simply scan your phone to pay. I have not yet opened a Chinese bank account, so I still need to set this up. For this reason, it has been a bit frustrating to deal with payment, as many stores do not take international credit cards (even Visa) and it was a challenge to find an ATM that would accept my card to withdraw cash. Some places don't even take cash at all and require only the mobile payment or a local card. 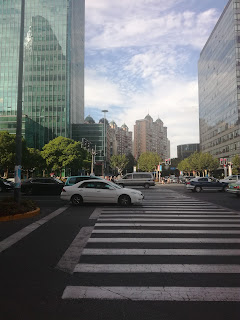 Along those lines, data plans for cell phones are affordable, and the vast majority of people have smartphones. It's really popular to find QR codes on posters, advertisements, and elsewhere. China has its own version of many apps that are popular in the U.S. but blocked in China, like WeChat instead of Messenger, Didi instead of Uber, and Baidu instead of Google Maps. NYU has academic freedom agreements with the Chinese government, allowing students to access websites on the university network that would otherwise be blocked and providing us with a VPN. For this reason, getting on Facebook, Google and other sites will not be a problem for me.

When restaurants bring water to the dinner table, the default water temperature is warm. If you want ice water or bottled water, you have to specifically ask for it. 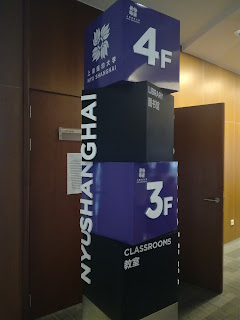 Clothing here is pretty westernized. Lots of short shorts/skirts and "cute" looking overalls. I noticed that a lot of the products have a "cute" aesthetic as well, with animal designs and pastel pink and blue colors on a lot of the household items. 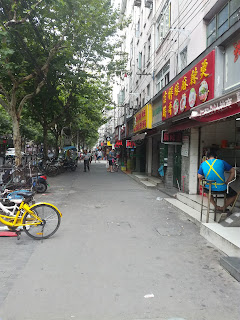 The street food is very cheap and very plentiful. Things are generally much cheaper than the U.S. here, except maybe at the western stores and restaurants. Dairy products, cereal, and other imported items are much more expensive. A lot of the western brands are around, like H&M, Adidas, McDonald's, Burger King, Pizza Hut, and more. The more exciting places to explore and eat are the local shops, though.

I've decided to start collecting interesting English translations/phrases because they make me laugh.

Food
For a welcome dinner, NYU Shanghai took the study away students to a nice Shanghainese restaurant. I liked some dishes better than others. Some dishes I liked included seafood soup, fried fish with a sweet sauce, yellow curry with potatoes and vegetables, barbecue pork, and a leafy spinach-like vegetable in a buttery sauce.

The "strangest" thing we ate (well, strange from my American perspective, at least) was plain boiled chicken, served cold, with the skin on, and with the head of the chicken still there on the platter. It was just kind of gelatinous and slimy, pinkish on the inside, and really not good at all. I'm a pretty adventurous eater and will try anything once, but this one wasn't my thing.

There are a lot of fruit/vegetable markets around, which I'm looking forward to visiting.

The cafeteria on campus is great (though in my opinion it can't quite measure up to the NYU Abu Dhabi dining hall- we are quite spoiled there). Most of it is Chinese food, but they also have a counter with pasta and other options.

Making Dumplings
One of my favorite things I've done so far was going with a group of students to an elderly care center where we made dumplings and played games with the residents. It was so fun learning to fold the dough wrappers of the dumplings, and they tasted so delicious afterward! 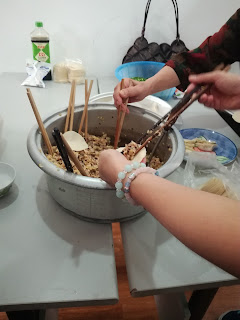 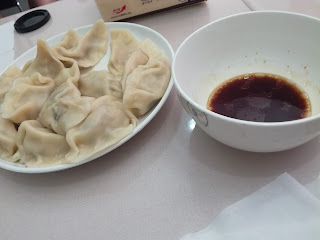 The elderly people were sweet, and the Mandarin-speaking students helped us translate so we could have a bit of a conversation. After that, we played a game with them where we passed a ball around the circle while one of the leaders tapped a drum. When the drum stopped, the person holding the ball had to perform a song for the group. This was pretty entertaining. 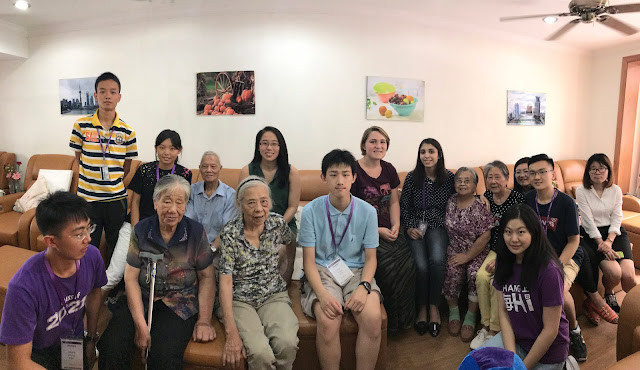 Church
Thankfully, there are branches of the LDS (Mormon) church in Shanghai, and I was able to attend the Jinqiao Branch for the first time this morning. There isn't an actual church building though, so church services are held in a rented conference center (Yongda International Tower). There were about 100 people in the congregation, and the families were so friendly and welcoming. The services are in English; the Chinese citizens have to attend a different meeting because of government regulations. Most of the members who attend are American expats, but some are European, Korean, Taiwanese, etc. I've been so blessed to have the church network around the world- the familiarity of the service and the instant connection with families when I'm in a new place is so valuable. One of the American church families graciously invited me over for dinner, and talking to them definitely helped me feel more settled and hopeful about fitting in here and learning my way around.

I'm looking forward to attending class tomorrow and continuing to settle in and familiarize myself with this country and city. Please keep in touch! My time zone is 15 hours ahead of California and 4 hours ahead of Abu Dhabi.

Much love from Shanghai,