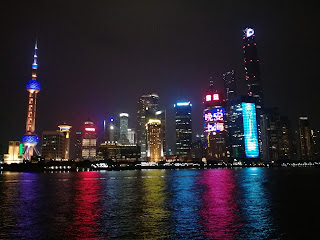 I've worked out most of the logistical issues of being here, like opening a bank account, learning to use the metro subway to get around, and setting up apps for payment and navigation. It was kind of interesting, because opening a bank account involved signing a bunch of forms that I couldn't read, since they were in Chinese. The bank could have the rights to my firstborn child, for all I know, haha.

I never expected to be one of those college students who lives on instant noodles, but the instant noodles here are so cheap and so delicious! There are so many options of flavors and spices for them. Don't worry, I cook sometimes too and eat at the cafeteria or other places in the city, and I get my share of fruits and vegetables, but my instant noodle soup consumption has increased drastically since coming here.

Anyway, I'll describe my classes in detail here, but feel free to scroll toward the bottom if you'd like to read about the more adventurous part of the week.

Classes
I'm taking 5 courses: Differential Equations/Linear Algebra, Probability and Statistics, Elementary Chinese I, Contemporary Chinese Political Thought, and a circuits class called Interaction Lab. I like that it's a pretty broad variety of topics, so it keeps things interesting. Three of my professors are Chinese, one is Korean, and one is Argentinian (I think). My favorite class so far is Chinese I, because we spend a lot of time practicing pronunciation, learning immediately useful and practical phrases, and participating throughout the lessons.

My Contemporary Chinese Political Thought professor is interesting- he likes to extend politics to its broader philosophical underpinnings and integrate pop culture references to illustrate his points. It's also fun to get a bit of the Chinese perspective on world politics- it gives us a framework to compare/contrast and criticize both the Chinese and the American systems of government in a way that I don't think would be possible in a U.S. classroom.

The two math courses are pretty basic and predictable at the moment- nothing too surprising there. Interaction Lab so far has been tinkering around with LEDs and basic electronic components, similar to things I've done before in other classes.

I also found the piano practice rooms on campus, so that's good. I love the view from the classroom windows- advantages of having class in a high-rise building in the middle of Shanghai's Pudong financial district. 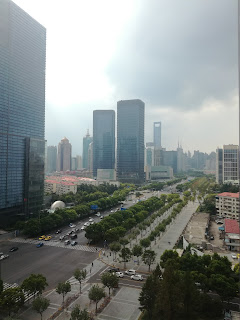 Lujiazui Garden
One day after class, I found myself feeling a bit tired of being indoors, so I decided to try to find this garden that was a short walk from campus. As I walked, it started pouring rain! I ultimately found the garden, which was a bit smaller than I expected, and I also found some shops to buy fruits and vegetables. By the time I got back to campus, I was soaking wet, but I had some delicious mangoes and a story to tell. 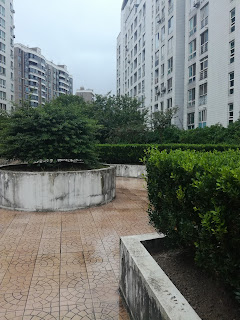 An interesting thing here is that a lot of grocery shops/ markets sell semi-live fish for cooking, directly from a tank, like this. I say semi-live because one of them rolled over and floated to the top right as I took the photo: 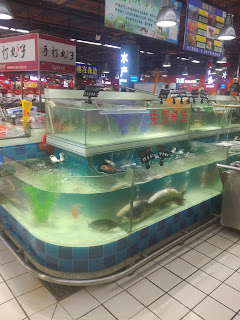 Sightseeing
Two of my apartment-mates had an assignment for their photography class, which gave us an excuse to be extra touristy and visit some historic areas of the city. Unfortunately, it was pretty dark by the time we got there, and a lot of shops were closed. My phone camera doesn't do well in the dark, and I am by no means a photographer, so you'll have to forgive me because the photos I took don't do it justice at all. I plan to go back and visit again during the day. 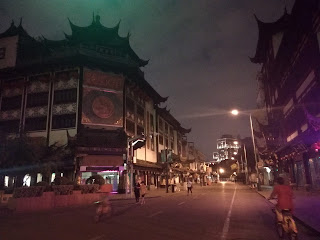 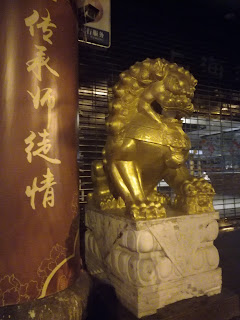 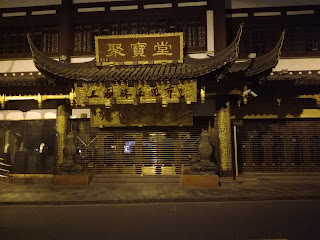 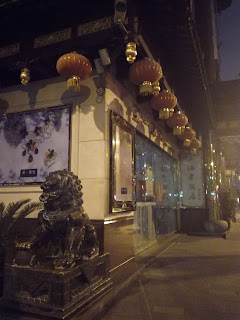 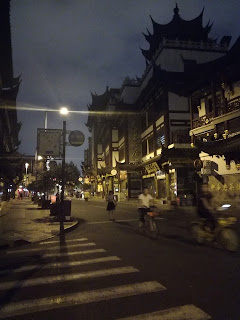 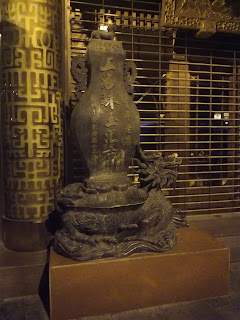 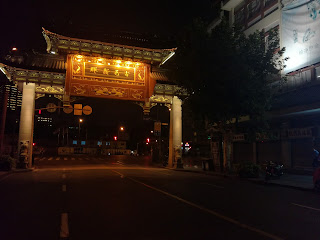 We then walked to a more modern area of the city for some beautiful views of the skyline along the Huangpu River. 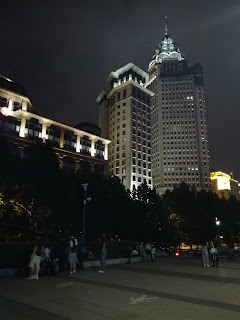 Disneyland Shanghai!
I went with three of my NYU Abu Dhabi friends to Disneyland's Shanghai Park. It's definitely smaller than the California one, but it had some wonderful rides and interesting Chinese flourishes to the park! The characters and rides were all narrated in Chinese, so it was pretty entertaining seeing things like the aliens from Toy Story and robot Captain Jack Sparrow on the Pirates ride speaking energetically in Chinese. 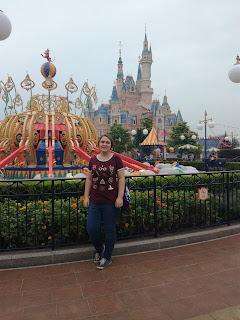 I expected to find a lot of western tourists there, but I was surprised to see only a handful of non-Asian faces among the thousands of Chinese visitors.

The best ride in the part was the Tron roller coaster, which was similar to Space Mountain but with the passengers seated leaning forward as if riding a bike. Instead of Soarin' Over California, they had a Soaring Over the Horizon ride with sites from around the world. There was a Seven Dwarves Mining ride similar to Disneyland California's Thunder Mountain Railroad. Although we got trapped in the rain for a few hours in the middle of the day, we still made so many memories talking while in line and exploring the rides.

One of the best parts of the trip was the fireworks show at the end! They combined elements of the Disneyland fireworks and World of Color show into one, so they had the water fountains, music, and color projections onto the Disney Castle while the fireworks were going off.
We took the metro to and from Disneyland. We left early in the morning so that we could spend the whole day in the park. I assumed that there wouldn't be much of a rush hour on the metro on a Saturday morning, but I was definitely wrong. Generally, the metro is clean and convenient, but during rush hour it becomes terrifyingly crowded. At each stop, I didn't think it was possible to fit any more people on, but somehow people managed to squeeze in. I was surrounded by people directly pressed against me on all four sides. Once we got to a major transfer stop though, most people got off and it became breathable again. Still, it's an experience that I'll remember. Fortunately, the metro stops are labeled in English and Chinese, so it's pretty straightforward to navigate.


I don't really have any funny English translations to add to the collection, except for a sign at the metro station escalator telling people not to stick their head/arms over the edge of the escalator area. I didn't get a picture, but the sign displayed the awkward-sounding sentence "Do not pop out the head or other body part," with a cartoon diagram of a person leaning over the edge. It made me smile.

Anyway, I'm really grateful for the opportunity to be here in this country and visit so many wonderful places! While it isn't always easy to be in a foreign country, most days I feel like the luckiest person in the world.