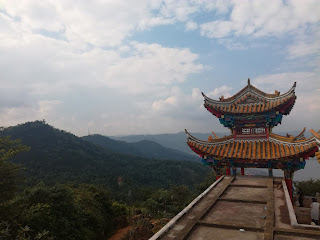 I have returned to Shanghai safe and sound from my fall break travels with a refreshed mind and a heart full of gratitude for everything I've gotten to experience this week. I'm so thankful for the friendships I've strengthened, the introspective late-night conversations, the adventures, the laughter, the memories, and the constant reminders of how unique and diverse the world is. I could probably write pages about everything that I've learned, but I'll try to consolidate it to the highlights.

When I left off last week, we were in Hangzhou doing some hiking and visiting Buddhist temples. The next day, we did a day trip to a small historic town called Wuzhen. Even though this place was filled with Chinese tourists, we were among the few foreigners there. It was such a romantic place, with shops along the waterfront and rowboats sailing smoothly along the canals. There were several areas demonstrating traditional Chinese handicrafts. 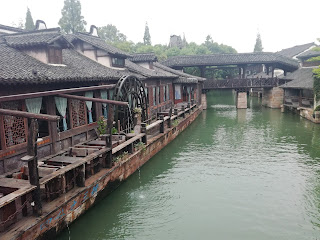 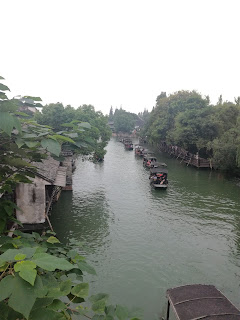 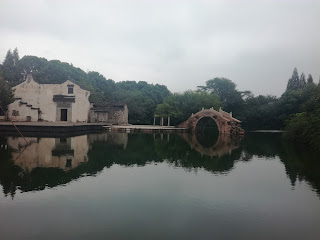 One interesting place in Wuzhen demonstrated traditional indigo dye techniques. Another interesting place was a museum of footbinding history, full of the little lotus shoes historically made for women with bound feet. 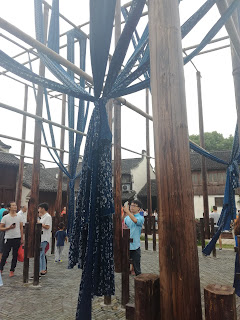 There was another museum all about Chinese wedding traditions, featuring traditional wedding clothes.

The next day, back in Hangzhou, we visited Qinghefang Culture Street and the City of God Pavilion, which is on a hilltop overlooking the city. On the cultural street, there were a variety of interesting street foods. Some had free samples for the mooncake holiday, so I got to sample many new foods. 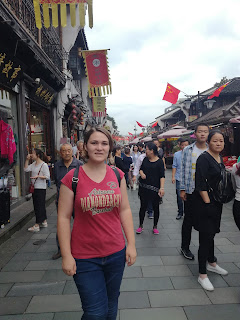 The pavilion was so beautiful, and there were many different sites to see there.


Outside one of the temples in the pavilion, there were some old ladies doing Tai Chi. When they noticed us watching them, they invited us to join! I should probably take this stuff more seriously because it's supposed to be peaceful and meditative and all, but I honestly couldn't stop laughing... 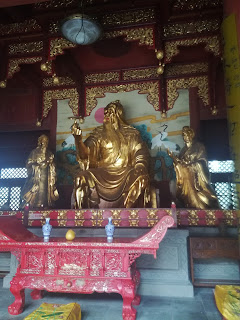 After visiting Hangzhou, we took a flight to Kunming, the capital city of Yunnan Province in the south of China. This experience definitely helped me appreciate just how large and diverse China is as a country, since Kunming was quite different from Shanghai and Hangzhou.

For starters, the air quality in Kunming was so much better than in Shanghai (I was reminded that the sky is actually blue and that you are not supposed to be able to see the haze in the air when you look into the distance, haha). Also, the people were from various different ethnic groups, and most had slightly darker skin tones than the average Shanghainese person, and features that I would previously have associated more with people from Thailand or Cambodia than people from China. Some of the signs at the tourist sites even had Thai writing underneath the Chinese.

The cuisine was different too: more noodle dishes and fewer rice dishes, and much spicier food overall. I love spicy and flavorful food, so I definitely appreciated this!
The street food in Kunming was plentiful, cheap, and delicious. The first night, we were randomly walking around looking for a place to eat (particularly somewhere with options for my Muslim friends, since so much of Chinese cuisine has pork). Anyway, God must have been watching over us, because we randomly stumbled upon a little halal restaurant run by these sweet Chinese Muslim ladies who grilled us some delicious spicy kebabs as we sat outside around a little plastic table and talked. We ate SO much food.

I also discovered an interesting Yunnan pastry called flower cakes. The inside of the pastry is filled with actual rose petals and a sweet jelly-like taste, and there are variations that add nuts or meat to the filling. It's a really different taste from any American dessert I've had, but I really fell in love with it.

In Kunming, we spent a lot of time just exploring the city on bikes. As I've mentioned before, most major cities in China have a really convenient bike sharing system where you can simply scan a QR code on the bike with your phone, rent it for a few hours, and drop it off anywhere else in the city. Biking was the cheapest way to get around and it allowed us to see the most of the city.

One of the highlights of Kunming was visiting the Stone Forest, an absolutely beautiful area with some unique rock formations. 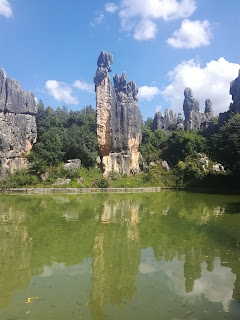 The Stone Forest park also had some cultural performances, which were interesting to watch.

One hidden gem in Kunming was the Yuantong Temple. It was probably the least touristy of the temples we visited, but one of the most beautiful by far. There were some Buddhist worshipers singing songs at the back of the temple, and the steady sound of a bell rang throughout the courtyard to keep time. 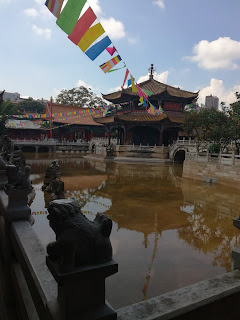 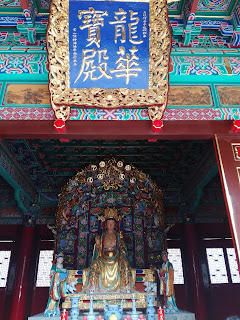 Unintentionally saving the best for last, we concluded our exploration of Kunming with a visit to the Xishan Forest Park overlooking Dian Lake. This place had beautiful hiking, more temples, and caves in the rock cliffs. I feel like I could wander forever in those hills... 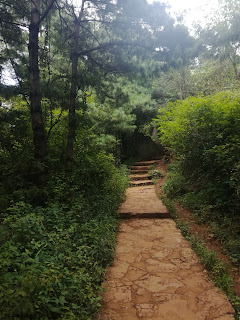 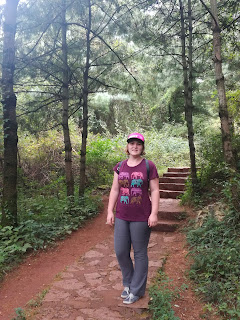 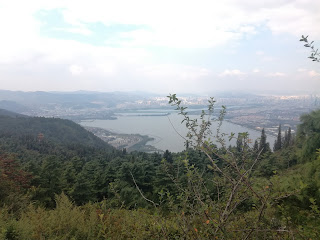 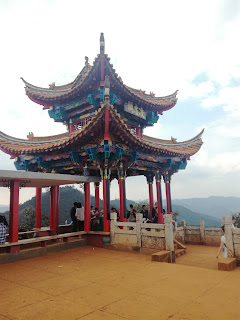 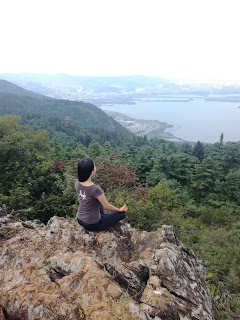 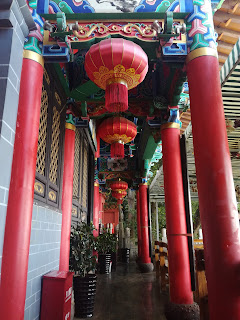 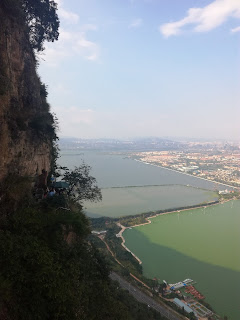 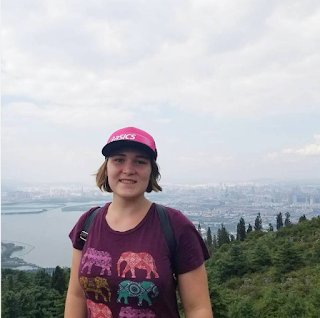 Most of today was spent travelling home to Shanghai. The train stations and airports were ridiculously crowded, as everyone is coming back to work after the holiday. There's something about the population density of Shanghai and the contradictory sense of group orderliness and control mixed with the pushing and shoving attitude of "every man for himself" that sometimes makes me feel like an insignificant speck in an enormous ant colony... can't really explain this any other way, it's the sort of thing you have to experience to understand.

To conclude, here are some miscellaneous pictures from a park we visited in Kunming while biking around earlier in the week. I loved the flowers and the beautiful greenery. I am definitely going to miss this. 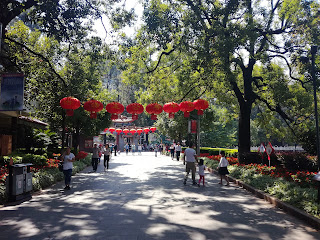 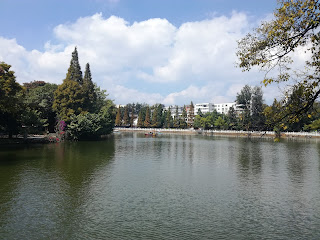 After this trip, I'm really starting to feel more comfortable in China, and seeing other Chinese cities besides Shanghai really helped me to put things in context. It was also the first time I realized that I'm starting to consider Shanghai as "home", in the sense of "coming home" to my Shanghai apartment after being away. As I said when I started this post, I'm mostly feeling incredibly grateful that I get to have these experiences and live the life I live.

Anyway, hope you are all staying happy and healthy. Keep in touch!