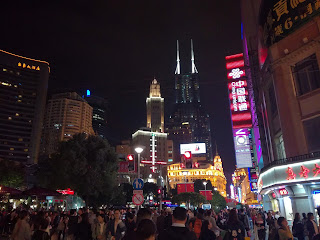 The weather is getting cooler (also quite windy and rainy, unfortunately), so I went shopping to get a few warmer clothing items, since I didn't really have the suitcase space to pack heavy jackets when I came. This was a good excuse to visit East Nanjing Road, a shopping area in the very modern part of Shanghai where the western stores like H&M and Forever 21 are. But down the little branching side streets, there are silk/craft shops and street food places, so there's plenty to explore. 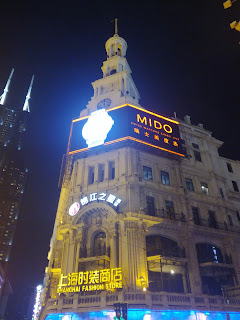 The next day, I had a trip for one of my classes to the Shanghai Maker Faire. This was such a fun event, where different companies and university students from all over Shanghai gathered to showcase handmade arts/tech projects. Probably a little over half of the people at the booths spoke English, so it was fun to ask them about how they made their projects, and it was good to get some ideas for things to work on, too. I tried asking a few people about their projects in Chinese, too, asking "这 是 什么？" and they understood me, but I couldn't entirely understand their explanation responses. I'm improving, though.

It was cool to see how many robotics/ coding kits and products are being made for children now, too! I wish I would have had access to 3D-printing or known about Scratch programming or Arduino circuits when I was younger. A lot of the booths at the maker faire were geared toward kids, and Shanghai's kids are growing up in such a high-tech society that it's fun to see what they can create from such a young age. 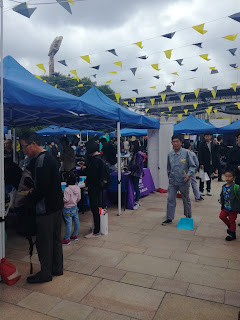 The event even had a drone-flying obstacle course for drone racing competitions!

Also, my church had a district conference this week. Since I've been travelling the past few Sundays, it was so nice to be back and spend some time listening to inspiring speakers, singing the hymns I love so much, and just reminding myself to shift my perspective back to the important things in life. People gathered from the surrounding cities of Hangzhou, Nanjing, and Suzhou. Apparently, BYU does some foreign exchange programs with a university in Nanjing, so I got to meet a bunch of LDS (Mormon) students from that program, and some other students who are in China to teach English.

I finally bought some of those air filtration masks just to try them, and I've been wearing them more often when I go out. The general consensus of people I talk to about Shanghai air quality is "At least it's not as bad as Beijing", but the smog is still visible most days. Not everyone wears the masks here, maybe 1 in 100 or 1 in 50 people on the streets, but it's not unusual to see, and most stores sell cute patterned ones and stuff. Not even sure if they even help that much with air pollution, but I'm finding that during cold-and-flu season when people are packed tightly onto public transport and coughing, sneezing, etc., I'm pretty glad to have my face covered.  In a place where my appearance makes me stand out, anything that grants some level of anonymity is kind of nice. Also it makes me feel kind of like Darth Vader, which is cool too I guess.

Finally, my time spent shopping for clothes allowed me to find some new additions to the "Interesting English of China" collection.

Anyway, love you all and hope you have a wonderful week!