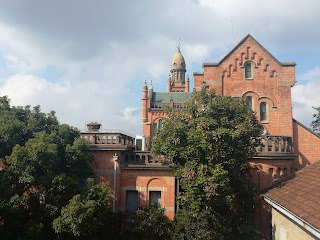 I'm listening to Christmas music as I write... it's almost Halloween, so it's technically the holiday season in the U.S. at least, right? It's never too early for Christmas music, haha.

Yesterday morning, after a busy week of classes, I wanted to get some fresh air/exercise, so I woke up early and went exploring in the Sheshan Forest Park area. It's in Songjiang, a suburb of Shanghai accessible via the metro (subway). From the Sheshan metro station, I rented a bicycle and rode for a while along this beautiful river. I went alone, because I wasn't about to drag my friends out of bed at 6 a.m. on a Saturday morning, but it was kind of nice and peaceful that way. There was a bike path alongside the road, and the traffic was so much less crowded than Shanghai. The weather was perfect, too. 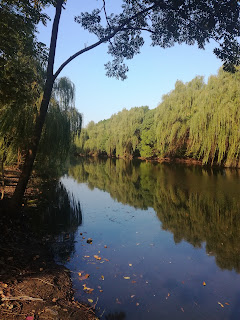 "Sheshan" is really more of a hill than a mountain ("shan" 山 means mountain in Chinese), but I rode the bicycle until I got to the north gate of the Sheshan National Forest Park. My friends know by now that if I'm stuck in a big city and there's a place nearby with the words "forest" and/or "national park" in the name, chances are I will find a way to get there, haha. 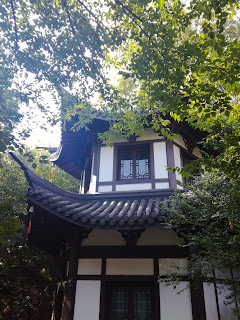 At the top of the hill, there was a historic Catholic Church called the Sheshan Basilica, and also an observatory with an astronomy museum inside.


The view from the top was mainly a representation of how polluted Shanghai is, haha. Couldn't see much of the city through the smog. 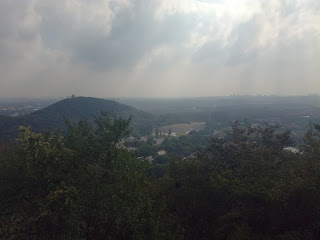 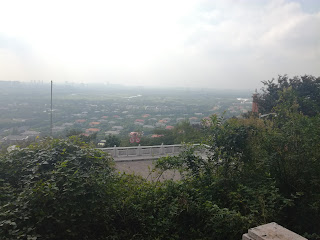 Another thing I did this week was visit the Halal Market outside the mosque near our school campus, with some friends. The market happens every Friday. Thanks to a friend who translated from Mandarin to English, I briefly met some of the salespeople who are Uyghur Muslims from Xinjiang Province. They said that they bring dried fruit and nuts all the way from there to sell in Shanghai. Uyghur is such an interesting language... so entirely different from Mandarin that the sound of it caught me off guard at first, I almost thought it was Arabic (I guess after being in the U.A.E. for so long it was my first reaction), until I realized it definitely wasn't Arabic either. I've been really surprised at the number of churches, mosques etc. in China, for its reputation as such a secular country. At the halal market, we got some spicy kebabs, some Xinjiang-style yogurt with honey, and some other snacks. We got free samples of the fresh grapes and pomegranate as well.

On the topic of food, which I find myself writing about a lot, I recently tried a Chinese street food item that I really like, and I have no idea why it hasn't caught on elsewhere. It's the same thing as a waffle, and it's made the same way, except that instead of being baked into a shape with pockets, it's baked into a shape with round puffs. Then you can fold it over and tear off one bubble at a time, and you get little waffle bites! This is such a genius idea! There are also ones with ice cream in the middle like a waffle cone. Sometimes it's the little things in life that make me happier than they probably should, haha. 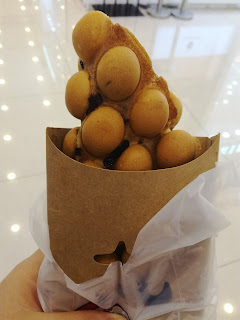 Some random thoughts I've been thinking about:
I stumbled across this cute little webcomic the other day. I mean, we've all heard a million times how social media can be detrimental, promotes unrealistic expectations, etc., but this still made me laugh and cringe a little.

When I'm on the other side of the world and I'm posting primarily for the audience of American family and friends back home, my surroundings are often different from the things they're familiar with, so it becomes very easy to create a sort of illusion that life is always this amazing adventure. It becomes easy to detach, to "exoticize" things, to filter out the mundane, the controversial, the challenging aspects. On the other hand, I don't like how some media has started to almost swing too far the opposite way, to glorify victimhood, to sensationalize the "courage" of public confessions even if they call into question the character of the writer and expose deeply personal information which may or may not even be true. Things we put on the internet are more or less permanent, and they do matter.

What does it mean to be "real" on the internet then- when we all become different versions of ourselves in different situations and around different people anyway?

So I wonder, do I talk about the exam this week that didn't go well, or the million assignments I need to somehow get done by next week? Do I talk about how my grandpa is having open heart surgery tomorrow and my thoughts are so full of prayers for him that I don't have room to pay attention in Differential Equations lecture? Do I talk about the various other things that keep me awake at night? About 70% of the time, my life is really great, getting to work toward my goals, to make amazing international friends who support me, traveling to places beyond my wildest childhood dreams, etc. But the other 30% of the time is a little bit... easier for everyone to just ignore.  So I guess the point of all this is to make a disclaimer that we're all real people, we all have vulnerabilities and worries and challenges, and it's alright. This week kind of brought me face to face with a lot of those worries. But it's alright. It's part of being real and part of being human.

Oh, and I also wanted to share a video that was shared in one of the lessons at church today. It wasn't the first time I've seen it; I watched it pretty often as a teenager when I needed encouragement, but it's always such a powerful reminder to me: "Much of the confusion in this life comes from not understanding who we truly are."


Anyway, hope you all have a wonderful week- I'm planning on it!