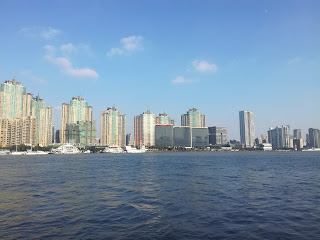 
I did get a chance to go on a bicycle ride yesterday with a friend, though. I think I'm going to make Saturday cycling a regular thing on weekends when I don't have plans. It's a good way to combine exercise and sightseeing. The weather is so nice right now- just getting into sweater weather but not too cold, and the endless overcast skies and rain finally stopped, so I'm enjoying being outside.

I should explain that Shanghai has a river that runs through the middle of it, called the Huangpu River. The side of Shanghai east of the river is called Pudong, and the side west of the river is called Puxi. (dong 东= east, xi 西= west). My apartment and the academic campus are in Pudong, which is the newer, more business-oriented side, but Puxi is the older, more historic side that I don't visit nearly as often. So we rode from the dorms to the ferry boat station, then took the ferry boat across the river to Puxi.

Once we got to Puxi, we rode until we got to some streets with historic architecture, shops, and restaurants. Apologies for not having that many pictures, because even though we passed a lot of really pretty areas and parks, I didn't want to stop and get off the bike. But the area we were in had a lot of smaller streets with trees arching over the road. We got dinner at a noodle shop. 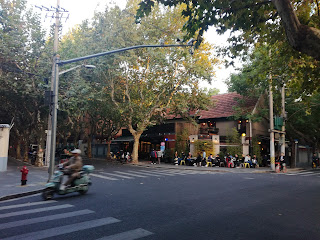 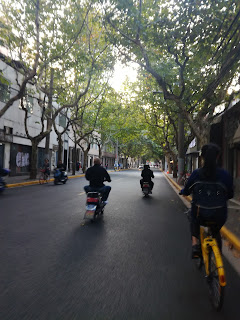 I don't really have any plans for Halloween. There are some decorations and stuff in some of the stores here and there, but otherwise it doesn't seem like it's going to be that big of a thing here. That's totally fine with me, though. To me, Halloween is one of those holidays that mostly stopped being fun after getting too old to go trick-or-treating.

I found "green eggs" at the grocery store. Dr. Seuss would be proud. Maybe one day I'll see if green eggs and ham lives up to the hype. I honestly have no idea what green eggs actually are though. 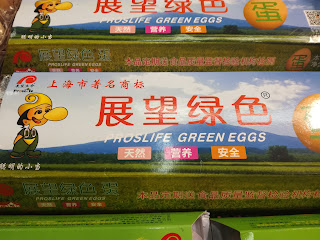 The highlight of the week was when the cleaning lady in the bathroom on the 8th floor of the campus building caught me trying to fix my hair in the mirror and told me I was beautiful (in Chinese). She's the sweetest lady ever, one of the few campus cleaning staff that goes out of her way to talk to the students, even though she doesn't speak English, and I really wish I had the vocabulary to say more to her than just "thank you". It really inspired me to have the courage to get outside my comfort zone and talk to people more often. 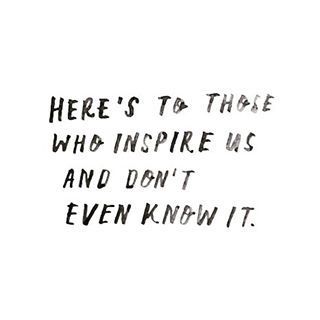 The other highlight was going to get overpriced Haagen-Dazs ice cream with my roommates to celebrate finishing one of our exams and making it through a crazy week! As I told them, I have a theory that nearly all life's problems can be at least temporarily resolved by hugs, duct tape, and/or chocolate. This example of the healing powers of chocolate was no exception. So worth it.

A thing I've only ever seen here in China: there are these huge groups of middle-aged/elderly people in the evenings who get together in public areas and do this aerobics dance exercise on the sidewalk. As far as I can tell, a few people stand at the front and lead the movements, and everyone else follows, lifting their arms/legs or marching, etc. in rhythm to the music. I'm really really tempted to randomly go join them one of these days, haha it looks so fun.


I volunteered to play a piano solo in church today, which I usually do once every few months or so, but it was my first time doing one here in Shanghai. I'm really glad I chose the song I did (a version of a hymn called "Abide With Me"), because to be honest with everything going on I was originally going to just "recycle" a song that I had played before, and I even had one in mind that was a little bit more complicated (i.e. impressive) and wouldn't take too much practicing to put together in time. But for some reason I really felt like I should learn a new song, so instead I picked one that was simple enough to learn in a week, and I took time during my lunch breaks to go practice in the piano rooms. I'm really glad I did, because a few people after came up and told me that it was one of their favorite hymns or that it reminded them of someone important to them, etc. So that was a good reminder that sometimes it's better to keep things simple and meaningful. As one of my favorite music teachers has said, "we perform to bless, not to impress." Good stuff.

Anyway, I've got assignments to finish so I'll continue writing next week. I miss Abu Dhabi and my friends there a lot these days- only a few short months until I return!