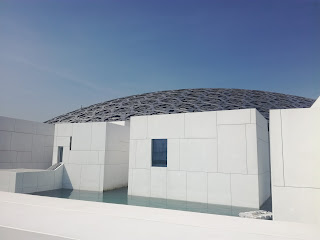 I finished my first week of spring semester. The weather is nice, right around 75 F/ 23 C and sunny. I kind of feel like I went through the 4 seasons in the course of about a month: Cold winter weather in Shanghai, a bit warmer "spring" weather in California, warm/humid "summer" weather in Ghana, then moderate "autumn" weather here in Abu Dhabi. This time of year is the best to be in Abu Dhabi by far. 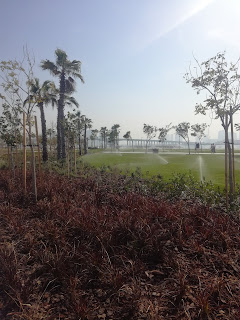 Even though I love visiting new places, I have to admit it's nice to be back in a place with some stability and familiarity after so much adapting to different places recently. I have a storage locker with stuff here, so I didn't have to buy things for my apartment from scratch. I know where things are in the city and how the system of the school works. Things are just generally easier here, even little things like the on-campus convenience store that allows us to pay with our allowance of "campus dirhams", instead of having to make time to grocery shop at those Chinese stores in Shanghai where I couldn't read the packages/labels sometimes. A lot of people have greeted me with "welcome home" instead of just "welcome back", and the sense of familiarity reinforces that idea for sure. Home.

Most of freshman year and last semester involved more of the general ed classes and introductory science/math requirements, especially with the interdisciplinary NYU "Core" curriculum being what it is, but this semester we are finally starting to get into the depth of the electrical engineering major. My classes (as of now) are Circuits, Digital Logic, Complex Variables, Discrete Math, and then a Core class called "Dis/Abilities in Musical Contexts". Usually people are a little confused when I mention that last one, but it's a pretty interesting class where we will be studying how society perceives people with disabilities and how music is created and interpreted by people with different abilities, like for music therapy. The class is taught by a music professor who is actually hearing impaired himself, and we're going to be doing a unit on deaf musicians throughout history. The professor offers a lot of interesting stories from his life and his experience and it's nice to have a more relaxed and discussion-based class to balance out the others. The other classes are also interesting but a lot more straightforward in their topics. Circuits lab was fun this week, very hands-on, and I think my soldering skills are improving. I also just added the Engineers for Social Impact class, a continuation of the program that sent me to volunteer in Sri Lanka last spring, so we'll see how that goes.

Other than going to classes and meetings, I spent a lot of time this week reconnecting with friends and catching up. One of the advantages of being at such a small school is that by this point I know most of the students in my major, and we all kind of take similar classes together. There are still a lot of new people though: the freshmen, the visiting students from other NYU campuses, and the upperclassmen who were doing their semesters away during my freshman year.

I went to church here on Friday. I used to be the only Mormon student here at NYUAD, as far as I know, but now there is a freshman guy as well, so that makes two of us. Last year, I used to get rides to church with a professor and his family, but they moved back to the U.S. recently. But this was one of those times that I'm super thankful to be at NYUAD, because we have an "Office of Spiritual Life and Intercultural Education" whose job it is to make sure that students have the resources for religious/cultural practices. So, especially now that there are two of us, we were able to apply through that office to get a driver to take us to church each week, funded by the school and everything. I'm feeling thankful for that because it was so convenient.

Anyway, one pretty cool thing that happened when I was gone was the grand opening of the Louvre Abu Dhabi museum! The U.A.E. government spent exorbitant sums of money to get the Louvre brand name and amass a pretty impressive collection of art from around the world. It's located so close too, on Saadiyat Island just 5 km away from campus. So yeah, it's a little bit mind-blowing that I now live on the same island as paintings by Da Vinci, Van Gogh, Picasso, and more. 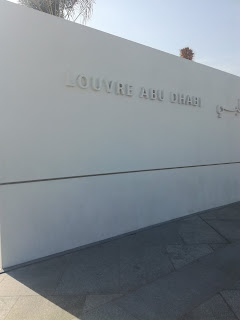 The building itself is really interesting architecturally. First, it's pretty much built on/in/around the water, so there's a view of the ocean from it, and the water kind of flows up around the buildings. 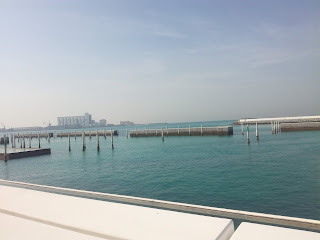 Second, the main roof is this huge crisscrossed dome that lets scattered light through it in an interesting way. Pictures of it don't really do it justice at all, because the effect when you're standing underneath it is almost magical, like the sunlight is glittering and raining down on you. 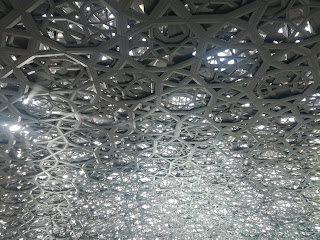 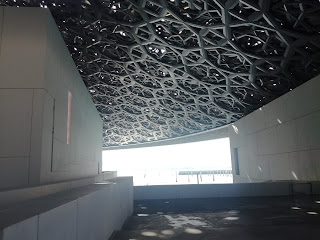 Another thing I liked about the museum was that it was arranged mostly chronologically, starting from pottery, fertility figures, arrowheads, etc. from 2000 B.C.E., then moving onward through different time periods. Works from vastly different parts of the world, but similar time periods, were displayed together. This was really fascinating to be able to compare. 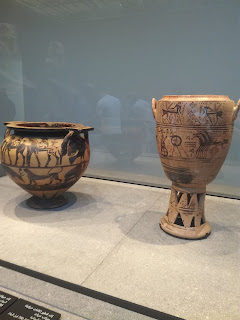 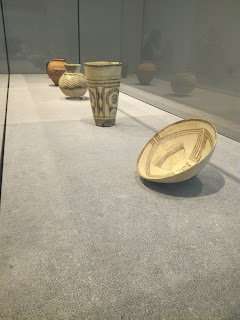 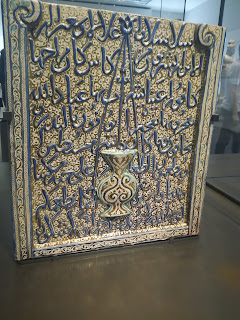 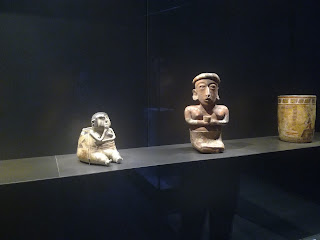 For example, a Buddha statue would be placed right alongside a West African ancestor figurine, next to a carving of the Virgin Mary, next to a sculpted Aztec god. Japanese samurai clothing would be right next to a Medieval European suit of armour, right next to a war helmet from the Ottoman empire. One especially powerful exhibition had different holy books from different world religions, with beautiful calligraphy from around the 11th century. They had pages from the Torah, Bible, Quran, and even some Jain sutras. It was especially powerful because the audience at the museum reflects this same diversity... people really come to Abu Dhabi from all over the world and you can see the effect of this global dialogue and collaboration in the art collection here.

I'm not very knowledgeable about art or art history (other than the concepts I had to memorize for Academic Decathlon in high school) but it was so surreal to be in the same room as these famous works that we read about in textbooks.

There were so many more, but those were the highlights. The museum itself was just so beautiful and everything was so newly built. 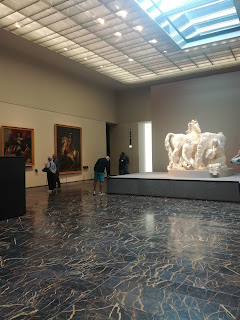 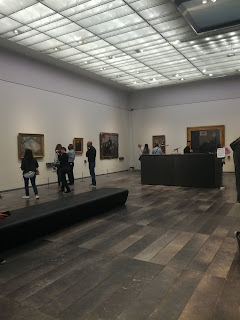 Here are a few more works of art that I particularly enjoyed:


The museum lobby even had live music by Bait al Oud. 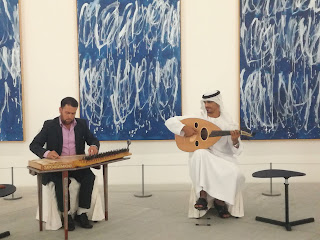 I was so glad I got to visit the Louvre Abu Dhabi and I recommend it to anyone who is visiting the city. Anyway, this is going to be a semester of hard work and hopefully exciting things happening, so wish me luck!