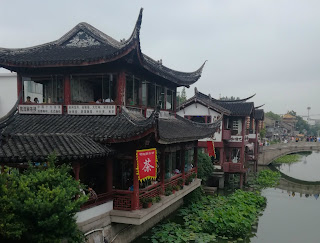 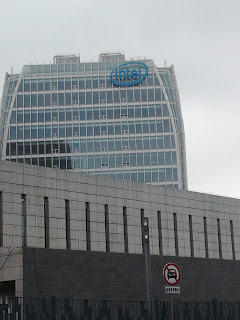 I'm pretty proud of myself because this is the first major travel/move that I've done all on my own, without any NYUAD support or friends coming along. Usually NYUAD helps us out with stuff like visa documents, housing, transport, having people to answer our questions, having fellow students around, etc. which makes things logistically easier. Even though this is a country and a city I've lived in before, it's still a formidable task to move to a foreign country alone at age 19 and start a new job. But I did it! I did it!
I was super fortunate to find a Chinese host family on Airbnb, and so I'm renting a room in an apartment with them. At first I wasn't sure whether to take the risk of staying for a whole summer with a family I had never met before, but they had good reviews and I really felt drawn to them, just an unusually good feeling about the whole thing. Now I know without a doubt that God brought us together for a reason.

They are an empty-nester couple whose daughter is away at a university in Beijing, so I'm staying in her bedroom. It is very convenient because I have access to their kitchen, refrigerator, washing machine, TV, and basic household items, but I also have my own space when I need it. It has also been both an adventure and a great opportunity to practice my Chinese, because my host father Uncle Zhu speaks only some basic English and my host mother Auntie Xiaoqing doesn't speak English at all (beyond a few words). Usually she is home more often, so I speak to her every day in Chinese, and we use hand gestures and Google Translate when my limited vocab fails us.

Auntie Xiaoqing is the best! She's so patient with me, speaking extra slowly and asking after every sentence if I understand, and then we laugh together when again and again I don't understand, then we Google Translate the words until I get it. Every day she compliments me and tells me that my Chinese is really good, tells me that I am beautiful, asks if I have eaten food, etc. and makes me feel so encouraged and loved. She makes food for me pretty often and offers to do my laundry. Sometimes it's a challenge to communicate, but I am so so lucky to have her and she feels like a mother figure that I really needed. Yesterday I got out one of my Chinese textbooks and we went through a reading passage together word-by-word while she helped me with pronunciation and every character that I was stuck on. I felt like a child learning to read for the first time, but I'm going to have to swallow my pride if I want to learn. 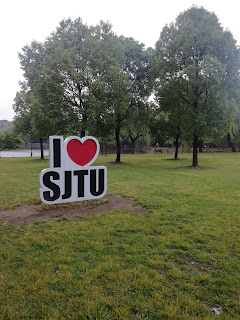 The positive take-away from this week is that I know I can be understood when I speak Chinese. Unless I get shy and start mumbling something I'm not sure of, my host family usually understands what I mean, which is a huge confidence booster for me to use the language more. The discouraging thing is that I still have a lot of trouble understanding native speakers even after this much time studying the language- they just speak so quickly and there are too many gaps in my vocab. The good thing is that I know enough Chinese to ask questions like "what is that?" "what does that mean?" "how do you say...?" in Chinese, so if I don't understand then I can just keep asking so that I learn. The gaps in my vocab are really funny sometimes, like because most of my vocab is from textbooks, I will know the word for "umbrella" or "boarding pass" or "traffic light" but miss more basic words like "spoon" or "full" or "wet". I feel like a toddler just babbling and repeating words until I understand them. I am learning so slowly and the idea that a person can just "pick up" a language right away just by listening to it is a HUGE myth. But hey, I'm learning, and even if all I get from this week is confidence, I'll take it.

The family also gave me a bicycle to borrow, so I ride it to work every day and use it quite a lot. Public transport is also very convenient, especially the metro- I love not having to drive haha. I am proud of myself because I took the public bus  this week and didn't get lost- last year when I was here I took it one time and got very lost and was too scared to take it again for a long time, because the stops can be hard to keep track of and I have a pretty terrible sense of direction.  I have still been getting lost a lot (well not really lost, just "typical foreigner wandering around with Google Maps" lost) which is not entirely a bad thing.

I had a pretty stressful moment this week when I accidentally left my house keys in a Didi car (Chinese version of Uber) just a few days after coming here. The driver didn't speak English either, so I wasn't sure if I could contact him and explain the situation. I really didn't want my host family to think I was so irresponsible as to lose the keys they had just given me. Luckily, I was able to send a message to the Didi customer service, where I got an amazing Chinese employee who spoke English and called the driver for me, and the driver dropped my keys off at the security booth of my apartment complex so I could pick them up when I got back. I am always so humbled by the ways that people here will go out of their way to help me as a clueless foreigner.

When I told people I was coming to Shanghai for summer, I had a lot of the following conversation:
People: You're going to Shanghai in summer? The weather is SO hot!
Me: You do realize I've lived in Arizona, California, and Abu Dhabi, right? I think I can handle it.
People: But the humidity! Shanghai summers are so humid!
Me: Well, I guess I'll find out.
So I came here braced for the worst, and actually the weather has not been hot or humid at all, but instead apparently this is Shanghai's rainy season, so we've had light rain and thunderstorms almost every day. As much as I complain about those grey skies that could be either clouds or smog or both on any given day, it's really not bad.

Work at Intel is alright. I'm the only foreigner on my team and there's only one other intern around, and she's not really working on the same things as me, so it's a lot less structured than it was at the Folsom California site, and I think it's going to take a little bit of time to get into the routine of what I'm supposed to be doing. My coworkers have been super helpful and nice though. I was a little worried about the language/culture barrier, but so far I haven't really had any problems understanding their English and they have been super gracious about speaking English to me and filling me in during their group conversations, which are in Chinese most of the time. I've learned some new things related to performance testing of the solid state drives and command line programming in Linux. The work team likes to joke around with each other which makes for a great atmosphere.

I made some new friends this week! We went out for durian and pineapple pizza (better than expected- durian is an interesting fruit that I first tried in Thailand; it smells like rotting onions but tastes a bit like creamy peaches). One of the girls was from Uzbekistan and was more comfortable in English than in Chinese, and the other three were from China and all spoke English with varying levels of proficiency. Thus, it was another great opportunity to practice language- we kept switching between English and Chinese throughout the conversation and helping each other translate for the others, which was super interesting to be a part of. 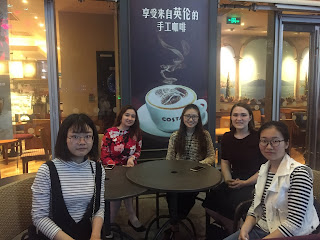 I went to church here and it was nice to see the families again. Always so welcoming.

I also decided to do some touristy sightseeing on the weekend to get back into the "yep, I'm in China again" mindset. I went to one of the historic water towns called Qibao Ancient Town. It's not the biggest or the best water town I've been to, but the street food was amazing and I had fun wandering around. 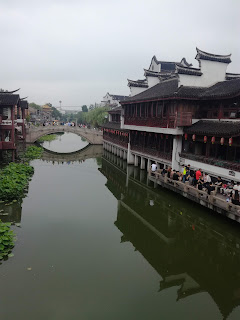 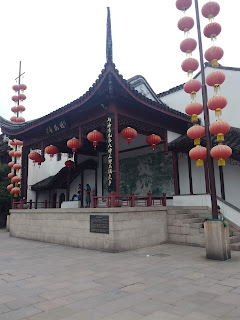 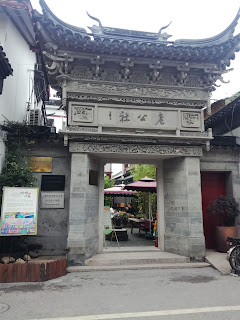 There was a Buddhist temple there as well with some monks who were singing, so I stopped by for a look. 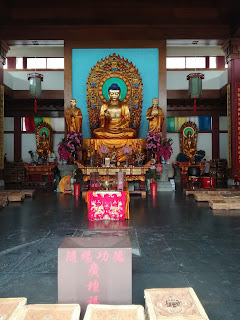 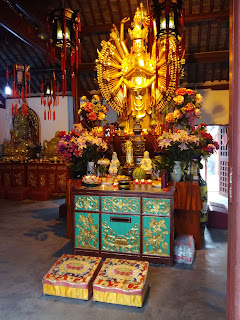 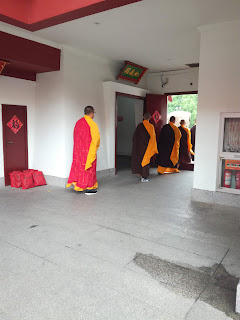 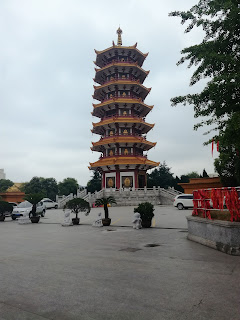 People were lined up for these crispy fried egg "pancakes" with green onion inside. I bought one and it was well worth it. 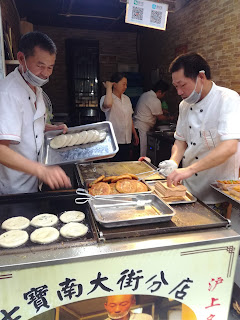 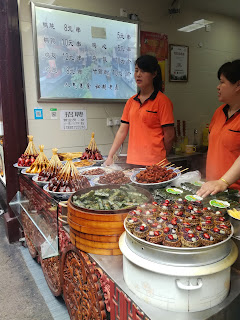 Another interesting thing from the Qibao Ancient Town was a little museum about traditional shadow puppet art. 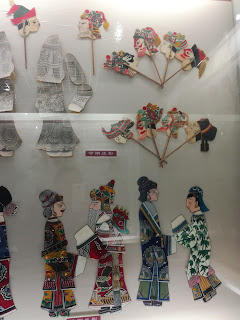 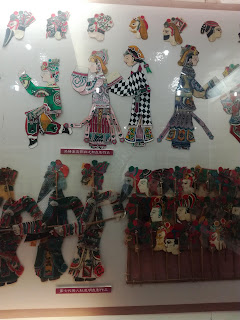 I'm going to continue my "Interesting English of China" compilation, because it's my little way of staying sane while learning Chinese, and because grocery stores here are a gold mine of awesome translations.

Anyway, here's to going with the flow, building my confidence, and embracing new things as they come.