Year 3 Semester 1 Week 1: Back in the Emirates 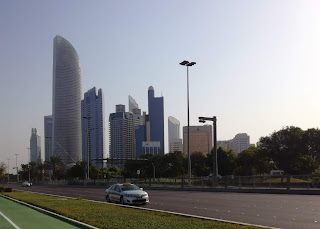 Classes are fairly busy, and while the workload hasn't reached its full level yet, we pretty much hit the ground running. Right now, I'm taking Electronics, Signals and Systems, a colloquium class about the environment called Reading the Earth, and Intermediate Chinese I.

At the risk of bragging a bit, I'm pretty happy about Intermediate Chinese I because I worked hard to get permission to enroll in this class. To summarize a long story, I took Elementary Chinese I last fall at NYU Shanghai, but then I couldn't fit Elementary Chinese II into my spring schedule and ended up trying to study it on my own. At the end of last spring semester, I met with the Chinese professor at NYUAD for a one-on-one evaluation, and she basically gave me a talk about how I needed more practice to be ready for Intermediate level, how it was a bad idea to skip levels, how it was too hard to study engineering and also a foreign language, etc. I was totally heartbroken and wasn't sure what to do. In the end, I took it as motivation to keep studying and prove to her that I could do it. This was one of the driving forces behind my desire to return to Shanghai this summer and live with a Chinese family.

I really tried to do as much as I could to improve my Chinese this summer, but I wasn't sure if it would be enough. Anyway, I emailed the professor again a week ago, and she responded by saying that I could attend the first day of Intermediate I class and that we would talk afterward to see if I was ready. I was so happy when I could follow almost everything that she was saying in the class and that I could keep up with the other students. After class, she gave me permission to enroll! We have a small class, only 6 students, and it meets 4 times a week, so this is a huge opportunity for me to practice and improve with her guidance. 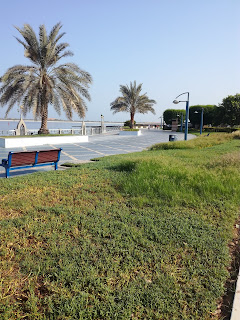 My other classes are pretty small as well, all less than 20 students, which is nice. We're finally in the upper level engineering classes, and at this point we're a pretty tight-knit bunch. It's going to be difficult, but it's nice to have friends to count on and know what to expect.

In Reading the Earth, we've been talking about industrialization and how it affects people's relationship to the environment, particularly in countries like China where development occurred very rapidly. The class is mostly open-ended discussion of literature, so it's nice to hear from everyone's personal experiences and what they bring to the table from where they've grown up. 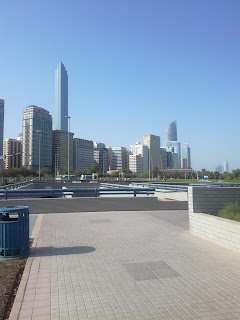 Another new thing is that I moved into the non-visitation dorms this semester, which is the women's-only building at NYUAD where guys can't enter at all. So far I think it was a good decision and there are a lot of advantages to it-- it's quieter on weekends, cleaner, has a better laundry room, and it's kind of nice not to worry about guys being in the halls late at night or guys being unexpectedly invited to the room by suitemates. This semester, I have three lovely suitemates that I share the common area (living room) with: one is Syrian, one is Bahraini, and one is Emirati. This semester I was lucky to get a single bedroom instead of the more common double bedrooms, so I don't have a roommate. I like to have a private area to rest and recharge, plus my sleep schedule is always a little bit all over the place, so I like this living setup a lot. 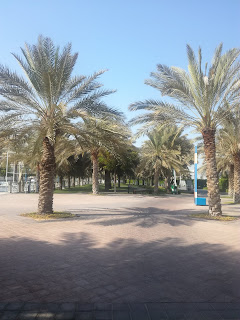 Today I went to the opening of a new lab at NYUAD, the Advanced Manufacturing Lab, which has a bunch of new prototyping and fabrication equipment. Some of it already overlaps with things in the Engineering Design Studio and the Arts Center, but I'm excited to see if a community develops around this new space and how it will be used as more equipment arrives.

Another highlight of this weekend was a game night with friends that involved Settlers of Catan (our favorite board game), a nerf gun fight, an intense game of monkey-in-the-middle with a squishy toy football, and other forms of barely-controlled chaos. Making memories.

I did my first practice test for the GRE this weekend. One year until graduate school applications. It's a scary thought- feels like I just finished the SAT/ ACT and all that stuff. GRE prep is definitely on my list of priorities this semester.

I haven't been off campus that much because I've had a lot to do in terms of unpacking and getting settled, so hopefully there will be more to discuss in a week or so. Also, the weather is HOT so I'm staying indoors as much as possible. Exciting plans ahead, stay tuned.

Much love from Saadiyat Island,