NYU's Engineering department, called the Tandon School of Engineering, is separate from the rest of NYU, in Brooklyn instead of Manhattan. All my classes are at Tandon, and I live in the NYU dorms in Brooklyn. That being said, downtown Manhattan is still super close and I have access to both the Tandon library and the main library in Manhattan, and there are NYU shuttle buses to take us back and forth. It's really convenient to be able to walk to class and live in a quieter area, but then still be close enough to visit the main downtown when I want to.

My classes (assuming I don't add or drop anything in the next week) are Communication Theory, Electromagnetic Waves, Feedback Controls, and Sensor-Based Robotics. Three cheers for electrical engineering! Looking forward to a lot of lab time and fun projects. Hoping the workload doesn't kill us all. I have a lot of NYUAD friends in my classes, which is great for the comfort zone, but I'm hoping to go out of my way to meet more new people this week. A lot of my professors are pretty well-known in their field and have a lot of research and/or industry experience, so I'm looking forward to learning from them. 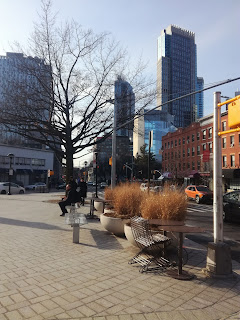 I've been here for just over a week, finished my first week of classes, and I thought I'd leave some first impressions.

It's COLDDDD. Going from the mild temps of Abu Dhabi and the warm Philippine islands to here was a big change. The first few days weren't too bad, around high 30s/low 40s F. Once I bought proper jackets and winter attire, it was mostly fine. But then we had some snow on Wednesday and the temperature dropped to 5 F on Thursday.  I don't know how these people in the Midwest and Canada do it. The 10-minute walk from my dorm to class feels a lot longer when there is freezing cold wind and ice, haha. 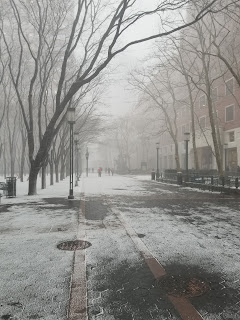 Cold does all sorts of things that I forgot existed, like the cold dry air makes a lot of static electricity and makes my skin super dry and my lips chapped. I think I'm finally starting to adjust, though.

Maybe just a stereotype, but New Yorkers are kind of eccentric and a bit rough compared to what I'm used to. You walk down the street and sometimes you can't really tell whether a person is on the phone or talking to themselves, and either way they're probably yelling angrily. The New Yorkers I've met so far are really helpful with directions but aren't very patient if you are taking too long or standing in their way. It's understandable though, given how crowded things can get. Also, crime rates are higher here so it's probably safer for everyone to mind their own business and have a thick skin. 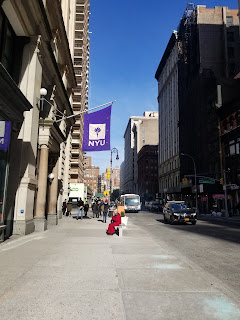 At NYUAD, the campus is pretty isolated and Abu Dhabi is generally pretty safe, so people leave their laptops and personal stuff lying around in the library, and I feel like if people did that here their things would probably "disappear" in a heartbeat. I don't feel unsafe though, especially since I live in a nice area that is mostly a student community, but New York City in general seems to be the kind of place that requires a bit of street smarts and awareness of your surroundings.

On a positive note, New York City is so diverse and international. I always hear the stuff about "The U.S. is a country of immigrants", the melting pot, etc. but it's easier to see it here. You can find just about every international cuisine, every kind of product to buy, and there's just always something new to see and do. My friends from other countries sometimes assume I know my way around New York just because I'm American, but it's my first time here and a lot of them know more about the city than I do. 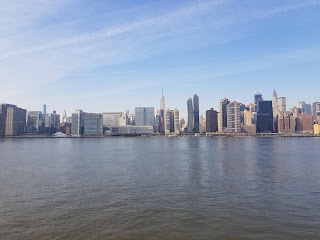 I've been spending most of my time getting settled and shopping for dorm stuff, since I could only bring the flight baggage allowance of things with me when I came. New York is expensive, but after being overseas for so long, it's nice to at least have the stores I'm familiar with and to be able to order from Amazon. Thank goodness for NYUAD scholarships. I did have time to do some city sightseeing, and I went to this place called Levain Bakery that had AMAZING cookies; people were lined up outside in the cold to get them.

The city is very walkable, but the subway is so terrible. It's old, dirty, has random delays and power outages, and is pretty confusing to navigate in terms of signage and stuff. I guess I have been spoiled by Chinese public transport and now nothing else can measure up, haha. I had fun doing some city sightseeing, though. 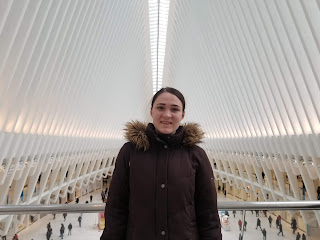 I'm taking the GRE exam soon (yay for possible grad school applications in a year!) so I've been studying for that and submitting internship applications for this summer. Still figuring out summer plans, but hoping for the best!

Anyway, I'll end here with a cautiously optimistic promise of getting back to weekly updates. Looking forward to more experiences now that the initial settling in has been accomplished. I'm generally liking New York so far, even though it's very different from the places I've been in the past few years. If you find yourself in the area, let's meet up! Hoping to make my way to Washington D.C. and/or Boston at some point in the semester as well, so we'll see how it goes.