Apologies in advance for the wildly inconsistent font style in this post. Google Blogger is giving me formatting issues and I don't have time to fix them at the moment. Anyway... I can't get over how nice the weather is right now. Definitely makes up for all the ridiculously hot and humid days in August.

Recently, Sheikh Mohammed bin Rashid (ruler of Dubai/vice president of the U.A.E.), wrote an open letter explaining some new government appointments including a new Minister of Tolerance, and I thought this quote from it was especially relevant and well-put.

"We have also learned from hundreds of thousands of dead and millions of refugees in our region that sectarian, ideological, cultural and religious bigotry only fuel the fires of rage. We cannot and will not allow this in our country. We need to study, teach, and practice tolerance – and to instill it in our children, both through education and our own example."

While the U.S. and the U.A.E. each have their own problems and unique cultural/political situations, I couldn't help but be impressed at the way it was written in contrast to the rhetoric from prominent U.S. politicians. Ultimately, the responsibility falls to each of us to set an example of tolerance- not by forcing ourselves or others to agree with certain viewpoints, but by learning to respect people on a basic human level and discussing opposing viewpoints without resorting to hatred or violence. Easier said than done, but at least it's being said.
Life Happenings

In Foundations of Science, we had exams in both physics and chemistry. I think that I am finally starting to learn how to prepare for them better- the first two interval exams were pretty rough, but this time around wasn't nearly as bad. We're learning to use LaTeX for formatting our term project research papers and physics lab reports. In Faith in Science Reason in Revelation, we're reading from both Charles Darwin and from Genesis Chapter 1, in preparation to discuss the Scopes trial. In Programming for Engineers, we're working on making a 3D virtual reality maze with the Oculus Rift, which is turning out to be pretty amazing. Virtual reality is a little too realistic for comfort; it still blows my mind how far technology has come and it's super fun to work with.
There is this interesting art performance called Holoscenes in the middle of campus to raise awareness for climate change/ rising sea levels. Basically the idea is that dancers mime struggling to perform everyday tasks while in a tank rapidly filling with water. I can't help but find it a little ironic that an art piece dedicated to sustainability wastes so much water/power, but I suppose it's for a good cause and it's a really innovative idea. 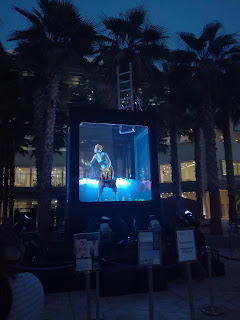 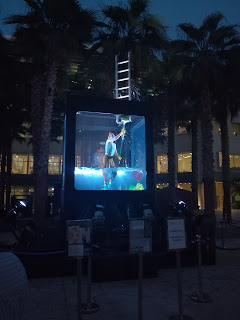 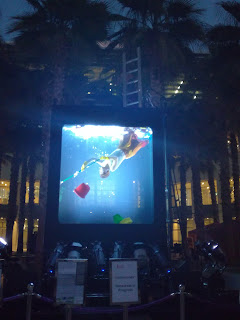 I went to this StartAD entrepreneurship lecture on computer programming from the founder of Method Coding School (based in Kazakhstan), so that was nice.

I registered for my spring classes, although at least one is still subject to change so I'm going to wait until the first week of spring semester actually starts to discuss them more.

On Thursday night I got Indian food in the city with friends. The Sri Lankan friends ordered bunch of random dishes for us, and it was so delicious. We followed it up with walking around the city and Cold Stone ice cream for dessert :) 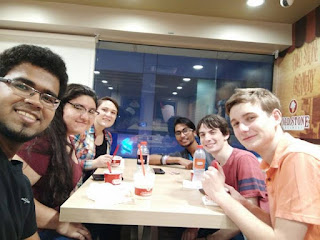 U.A.E. National Day (45th anniversary of the founding of the U.A.E) is coming up at the beginning of December, and the buildings are starting to put up lights and signs for it. The flag colours are red, green, and white, so I'm having fun pretending they're Christmas lights. 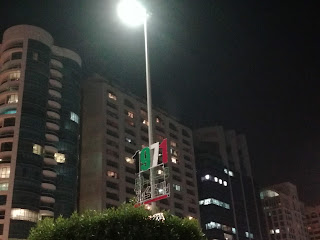 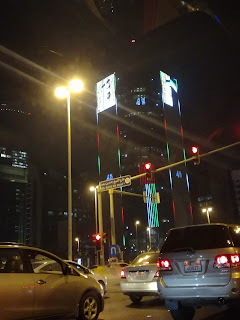 A brief rant: Some people at this school do NOT know how to do laundry. Walked into the laundry room last night to find that my wet clothes had been removed from the dryer and put in a random basket, and someone else had started their dryer load in place of mine...AND this person's washing machine was flooding all over the floor. Seriously, how much soap do people think they need? I couldn't help but laugh (sorry if you're reading this and this was you). 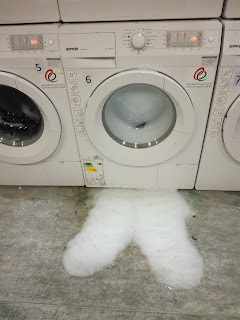 Visit to Al Ain
The highlight of the week was a little day trip to Al Ain, a city about 2 hours' bus ride away from Abu Dhabi. It has a slower-paced, more agricultural, less urban/westernized feel, and the landscape is a bit more green and mountainous. It was really nice to branch out a bit and explore a new place now that Abu Dhabi itself is starting to become familiar. 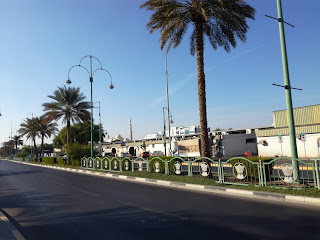 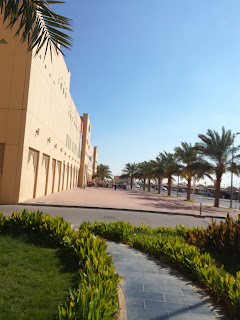 In Al Ain, I got to try Afghani food for the first time, from a little hole-in-the-wall restaurant next to Bawadi Mall. The place we went tasted a bit like a mix between Indian food and Lebanese food; they had things like kebab, hummus, fattoush, lamb stew, but also tandoori chicken, curry, naan, etc. The spices tasted slightly different from anything I had tasted before, and the kebab was prepared differently from the kebab I've had previously. The fresh naan was so good. 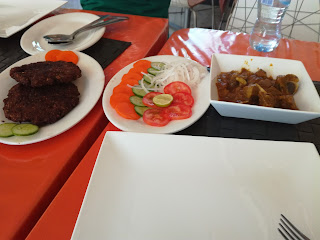 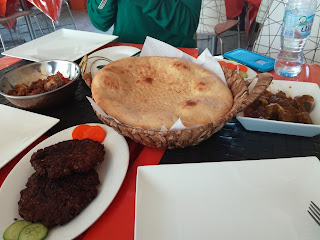 Within walking distance of the mall was the camel souk. This place was packed full of sheep, goats, camels and stores selling fodder and supplies for them, and we were the only foreigners there. It was nice that we had an Arabic speaker in the group, so we could interact with the camel salesmen a bit more- they were nice about letting us take pictures. It almost felt like traveling back in time. 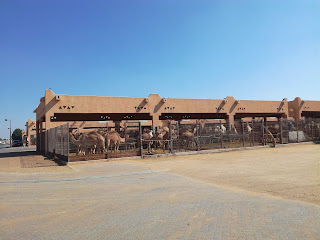 There were hundreds and hundreds of camels- at least 5 rows of stalls, with each row about three times as long as the section shown in the picture above. I had no idea that camels could vary so much- there were light-colored camels, tan camels, dark brown camels, baby camels, old toothless camels, big camels, medium camels, furry camels, short-haired camels, energetic camels, lethargic camels... and they all stare at you with this bored face like they're judging you. It's great. 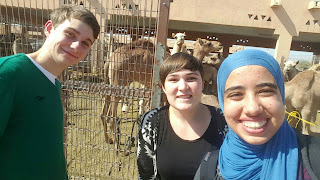 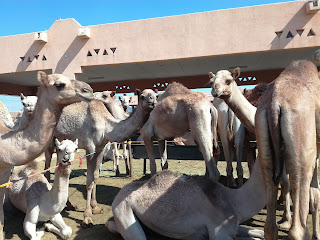 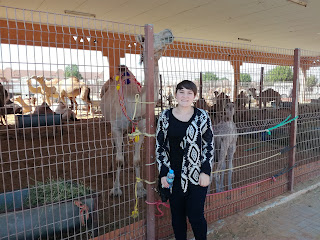 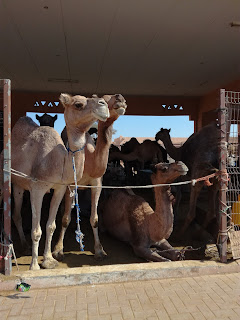 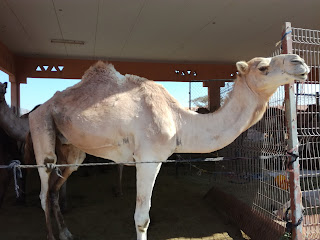 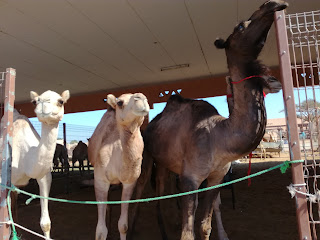 Anyway, after that we went to the Al Ain National Museum and looked at some artifacts that have been recovered from around this area. One of the most interesting ones was the storage jars from the first millenium B.C.E. 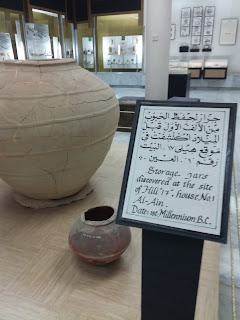 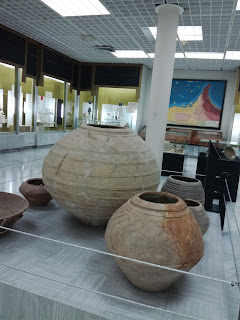 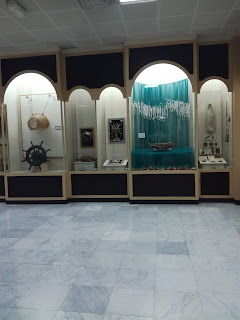 The museum had a gorgeous majlis room (sitting room with low cushions lining the walls) - we have one on campus too but this one was especially well decorated. 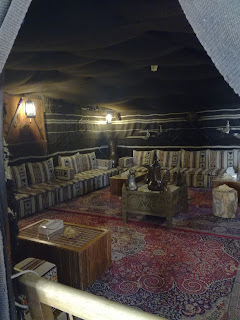 There was this interesting fort outside the museum as well: 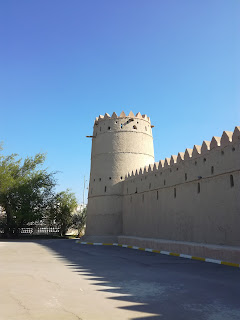 Finally, we went to the Al Ain oasis, a palm tree grove with a walking path. This area was so calm and peaceful, and it was so nice to be in nature after so much time in the city/desert in Abu Dhabi. It honestly felt like paradise. 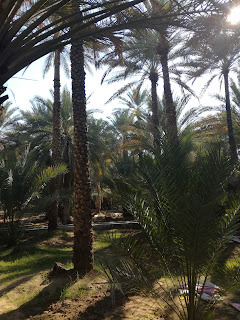 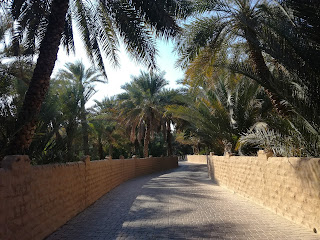 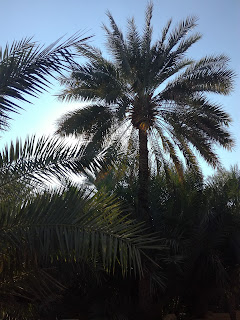 Every day I wake up and feel so lucky to be here, but especially during days like this. Wow.

Side note: although we can get pretty much all the major foods I would eat at home (and I was really surprised how many American chain stores are here) I still made a list...

On that note, I wish we had Target or Kohl's here because that's where I went to buy probably 90% of my school stuff/ everyday clothes back in the states.
I can't complain though, because the dining hall food here is pretty great, and we do have shopping malls everywhere...

Anyway, hope you all have a great week!