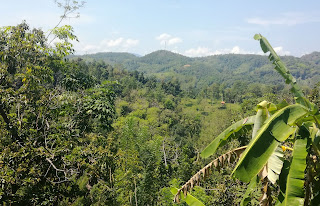 After finishing midterm exams last week (bio, chem, and physics all in a 2-day period, ouch) I left for a spring break trip with my Engineering Ethics class to volunteer in Sri Lanka in partnership with Habitat for Humanity. The trip is fully funded by the university, and I honestly still can't believe that the resources exist to be able to do this. Hotels, food, transportation, everything is financially covered because it is a class trip. Sending my gratitude to NYUAD and the Sheikh. All of the freshman engineering majors are doing these volunteer trips during our spring break. There are about 20 of us assigned to the Sri Lanka site, which is one of three locations. We're building houses for members of a Sinhalese community affected by a landslide.

I just want to make a disclaimer that I'm generally pretty skeptical of these "voluntourism" trips. Bringing in completely inexperienced people from all over the world to do manual labor and feel good about themselves is one of the least efficient ways of actually getting things done. I'm fully aware that we're not really making a lasting impact—the villagers are able to build these structures easily twice as fast as we can with half as many people, so we’re not really doing anything that they can’t do for themselves. At the same time, though, part of our Engineering Ethics class has an ethnography component, and so part of our experience as volunteers is to connect with the locals and observe how the infrastructure of their community works. Hopefully they also learn from meeting us, and maybe one day our connections there will allow us to return and do more. The trip is intended to make us more culturally aware and compassionate as engineers, and hopefully it at least accomplishes that much from an educational standpoint.

It has definitely been a humbling experience to realize how little I know about construction and how physically taxing manual labor can be. The weather is so hot and humid, and it has been a long time since I’ve worked this hard or sweated this much. Usually a few villagers show us what to do, and then we do it and work along with them, while they do the more difficult or technical parts. We worked on hauling roof tiles back and forth and handing them up to the workers on the roof of an already partially completed house, and then we helped with concrete in another house. When moving the roof tiles, we thought we were doing pretty well by standing in a line and passing them down one by one or a few at a time. Then we watched the local men throw the tiles to each other, tossing them and catching them using the momentum of their bodies instead of straining to physically lift each one individually. We quickly realized how inefficient our method had been.


Making concrete by hand was such hard work. We shoveled sand, shoveled rock aggregate, hauled water back and forth, mixed it, and transported it to the room where it was being placed as the floor. Everything had to be transported by hand or by wheelbarrow. The local workers had to help us with the mixing quite a bit: I now realize that mixing a pile of concrete with shovels is nowhere near as easy as they make it look. By the end of today, though, we were starting to get the hang of it. Also, the ratio of cement to sand to rock has to be just right for it to work properly. There’s a structured technique to everything they do. I’m amazed at how strong the people are. We've also tied together steel reinforcement beams and moved cinder blocks.

Connecting with people is such a powerful thing. The villagers don’t speak very much English, but we have on-site translators during the building, which helps. Some of the women in the village have worked in the Middle East as nannies  or housekeepers (this is a common thing in Abu Dhabi, for instance), and so a few of them speak Arabic. Since several of my classmates speak Arabic, we had a Sinhalese- English- Arabic translation chain going at one point, with a lot of hand gesturing, which was pretty funny.

Some of the villagers know a little bit of English, but the language barrier is definitely a challenge. In all honesty, I’ve felt more culture shock on this trip than I have with most of my other travels, and I’m not quite sure why. It’s not even the cliché “white girl travels to third world country and realizes how privileged she is” narrative, although I guess there’s some aspect of that. But it’s not like I haven’t seen third-world poverty before. I’ve traveled enough that it’s not new. Not quite sure what it is that’s so different. I think it’s just the sense of being expected to actually contribute to a community so far outside the realm of the things I am familiar with or knowledgeable about.


It has definitely been a battle with the heat, the insects, and the sun. I’m trying so hard not to get sunburnt, but the sunscreen comes off in sweat as soon as I apply it. I’m becoming painfully aware that my skin’s melanin content (or lack thereof) is pretty poorly adapted to this climate. So yeah, probably going to be tomato-red for the next week or so.

I'm not complaining, though. All of this is definitely worth it. I'm enjoying the hard work and it's such a refreshing break to be outside in nature all day. This trip has also been a great bonding experience with my engineering classmates and professors. Traveling with people allows for real conversations and real shared experiences that don’t always happen in a structured classroom environment. At night, we’ve been playing card games, listening to music, and talking about random things. It’s really nice.

A few of us had a nice conversation with one of the Arabic-speaking ladies from the village. She showed us the well at one end of the village where the people can shower, and she told us about how they harvest a milky substance from the trees and make some sort of food out of it to sell in the shops in the city.

This region of Sri Lanka has tea and rubber plantations as well. She told us about her family, her employment, and her experiences working abroad. From what I understand, most of the villagers are Buddhist but there are some Christians and Hindus as well. In general, I haven't taken a lot of photos of people because I'd rather focus on the beauty of nature and the tasks at hand, but I felt comfortable enough with this lady to ask for a picture.


Before the building, we had quite a bit of traveling to do to get to this village. First, we flew from Dubai to Colombo. The international terminal of the Dubai airport actually has the world's largest duty-free store. Actually, the entire terminal kind of looks like a shopping mall. 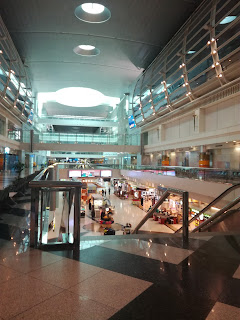 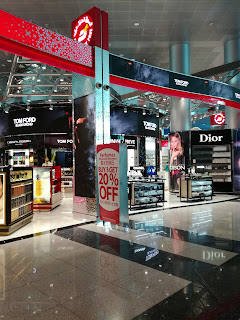 We stayed the first night in Colombo at a hotel not too far from the airport. Here are a few pictures from exploring Colombo: 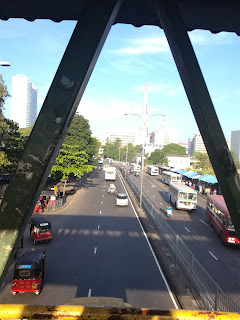 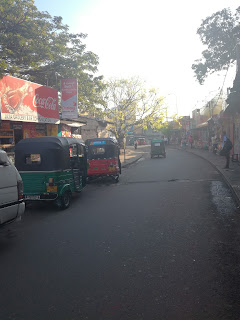 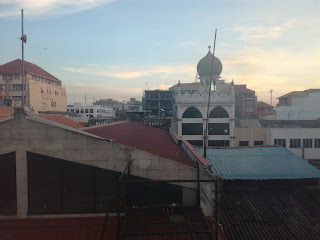 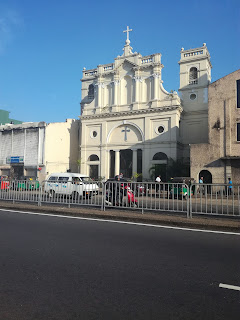 We then took a train from Colombo to Kandy. The view of the jungle from the train was absolutely exquisite. Living in the desert makes me miss this kind of greenery so much. It was surreal- the train cut through tunnels in the mountains and climbed up through the jungle on little winding paths with just enough room for the train tracks. There was a space between the train cars where we could look directly outside, so I stood there for almost two hours and just watched the incredible view. 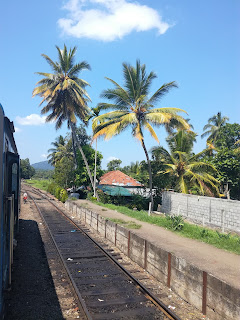 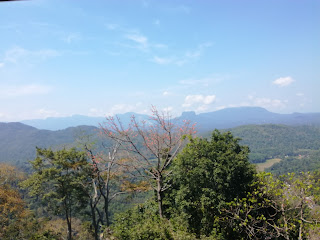 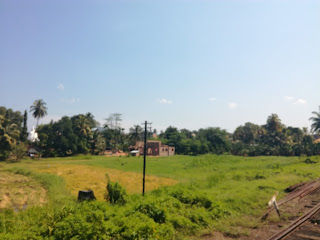 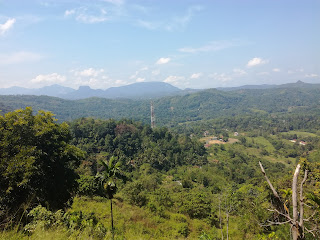 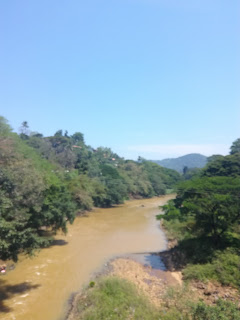 We then took a bus from Kandy to Pinnawalla, where our hotel is. Every day, we take a one-hour van ride through a winding single-lane road to get to the village where we volunteer. It makes for great conversations.

One of the best parts: our hotel is right by an elephant orphanage. I don’t think you all understand how excited I am about elephants. They are such playful and intelligent creatures. I’m uncontrollably excited about the elephants. We also saw a monkey today in the trees! It probably sounds childish or touristy but I find these things so fascinating. 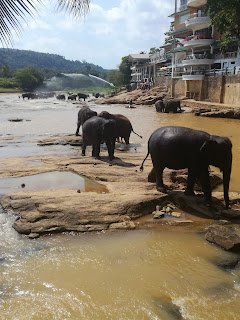 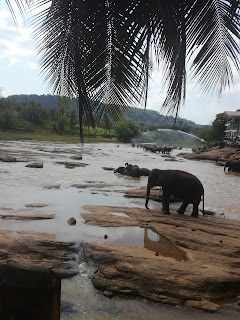 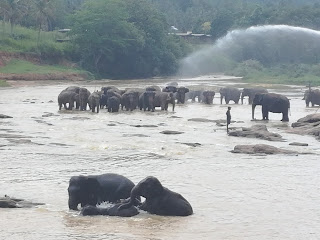 I love the food here. A lot of it overlaps with the things I ate in southern India, but Sri Lankan food uses more fish and coconut milk. I’m eating a lot of rice, vegetables, chicken, and fish with delicious spices. 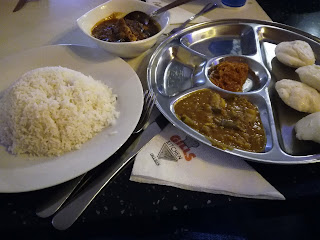 I'm pretty exhausted and my body is sore but it feels good to be working this hard out in nature. We have a day of visiting Kandy and three more days of building before we return to Abu Dhabi.

Hope you are all staying happy and healthy!