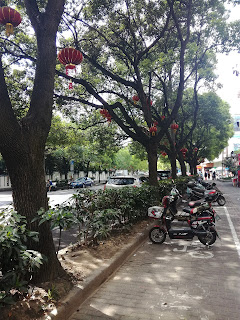 
Classes are good. Reviewing matrices and systems of equations in Linear Algebra, and set algebra and permutations in Probability and Statistics, so it's still mostly foundational concepts rather than entirely new material. Tinkering with Arduino boards in Interaction Lab, and discussing themes like trust between nations/groups of people and the challenges of integrating multicultural societies in my Contemporary Chinese Political Thought class.

After class on Thursday, I went to an interesting talk by some Japanese researchers who design 3D-printable prosthetic arms. Their focus was more on aesthetic design than functionality, but it was fun to hear how people worldwide have customized, 3D-printed, and assembled their own fashionable and cost-effective prosthetics, and also to hear about the Japanese robotics/electronics industry.


I have my first exam for my Chinese class tomorrow. I'm learning. Before I came here, though, everyone told me "Oh, when you get to Shanghai, you'll pick up the language so fast because you'll be constantly surrounded by it." I'm very quickly realizing that it's really not that simple, not that easy. I meet expat families who have lived here for years and still don't really speak Chinese beyond the basics. I sometimes try to order food using my simple Chinese and pointing at pictures on the menu and still end up with the wrong order and just eat it anyway because I don't know enough of the language to really explain the situation. The problem is that the vocabulary we learn in class follows a very scripted dialogue, while the real world has so many varying situations and mostly I try to say one sentence, and then the reply I get is a stream of words I don't understand. It's not fun to be in that situation- it's so easy to get worried about being misunderstood and just stop trying altogether, to just go to the places with English menus and buy my own groceries without speaking to anyone and just be too afraid to open my mouth. But I didn't come all this way to be afraid, so I'm trying to persevere. It definitely gives me some sympathy for the immigrants who come to the U.S. and struggle to learn English- it's not an easy thing to do.


So I'm celebrating the little victories, like when a taxi driver asked if I was from the U.K. and I said "No, I'm from the U.S." in Chinese and he understood. And another time I told a taxi driver to "stop here" and he understood, and it was the first taxi ride that I explained my destination verbally without showing him a phone screenshot of the address written in Chinese. Or when I got dinner with one of the Chinese students and she taught me the names of all the foods that we ordered, so I can order them next time with hopefully a bit more success than what I've been having. My roommate says that my pronunciation is good "for a foreigner", so I'll take what I can get.

More about food
I feel like all of my posts are about food, but it's one of the main differences worth discussing, so here goes...

One of the problems I have with ordering local/street food is that I need to learn the names of the foods in Chinese, AND what each food actually is (since the foods themselves are unfamiliar), AND how to recognize the Chinese characters for each food when reading the menus. Also, the names of the foods don't really translate well to English. For example, there are so many different kinds of dumplings in Shanghai, but only one word for "dumpling" in English, so it's not like I can just Google Translate the menu to English and know what it's talking about right away. Also, some foods are subcategories of others. Like I've tried baozi, which is something like a smooth white-bread roll stuffed with meat or vegetable filling. But there are so many types of baozi depending on the size and what the filling is, so it's not like you can just go to a restaurant and ask for an order of baozi; you have to be specific, which takes more language skills...

Now that I'm starting to get a feel for which Chinese foods I like and which restaurants around here are good, it's getting better, though.  As I said before, the street food here is so inexpensive- one night we got enough food to feed 3 people for about $6 USD. I really like a kind of dumpling called xiaolongbao which I'm told are a signature Shanghainese thing, and also tangbao, which are buns filled with soup broth and meat, usually pork. Eating tangbao is a very delicate process; I learned that you have to hold the tangbao with chopsticks and bring it to your mouth, then take a small bite out of the outside, sip the broth out through the hole you've bitten, then eat the rest. The first time I tried to eat one, I didn't know it would be filled with liquid, so my chopsticks punctured it as I brought it to my lips, and I burned my mouth while spilling hot oily soup broth all down my shirt. I was pretty annoyed about it at the time, but now I just have to laugh...

Also, Lay's potato chips have fun flavors here! Some of them I've seen before in Thailand, but I finally bought some of the Roasted Squid flavor because I had to try it. It tasted like the regular Barbecue Lay's combined with the taste of fish crackers. 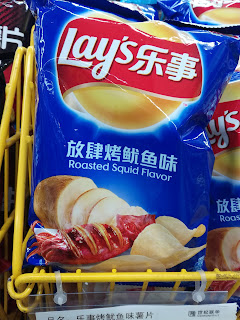 Pedestrians don't really have the right-of-way here in traffic light crosswalks, so the cars and bikes that "turn right on red" will just keep on going and the pedestrians have to get out of the way, even they're in the middle of crossing the road.

For some random reason, Pizza Hut is really popular here. I see one in almost every shopping center, and they are usually full of people.

Eyelid glue is a thing that is used by some women here, and I hadn't heard of it before. Women glue the upper eyelid skin to create a "fold" that makes the eyes look rounder or more "western". I guess it's not too far off from gluing on false eyelashes, but it still sounds pretty sad and painful to me.

There are a lot of nail salons, spa places, massage places, etc. Generally people on the streets, especially in the financial district where the university is, tend to be really well-groomed and well-dressed. A lot of the female Chinese students come to class in nice dresses/skirts and heels. It makes me feel like I should probably try a little harder, haha.

Anyway, I'm in the process of planning some future adventures for the upcoming mid-autumn holiday, so hopefully there will be more to share in the coming weeks.