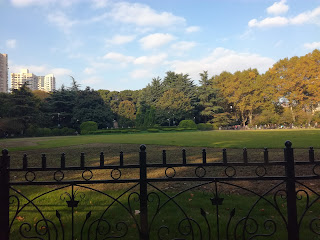 One of my apartment mates recently got a Polaroid camera, so I'll include a couple low-quality vintage-looking photos of us. The main problem is that I can't take a camera phone photo of the Polaroid photo without getting a weird glare. Oh well. 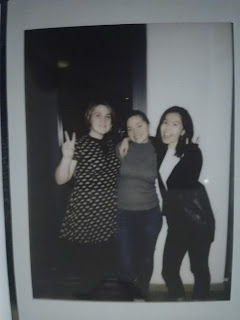 The main highlight of this week was going to a free concert, called Oasis Music Festival, at Shanghai Jiao Tong University (SJTU), one of the more well-known Chinese universities in Shanghai. It was such a fun experience. It felt so amazing to be part of the crowd of Chinese college students, cheering and dancing and singing along a bit, and feel like I've integrated into the country in some way that I hadn't before. At first I wasn't going to go, because it was on a week-night and I had work to do, but I rationalized that it counts as Chinese language practice and experiencing the culture of Shanghai, so I ended up going anyway. I'm so glad that I went. I absolutely love listening to live music. Most of the bands that played were Shanghai-based. I think some of them might have been college student bands, and most of the music was alternative rock/ pop genres. Five different groups played over the course of a few hours, and one of the bands sang in English, while the other four bands sang in Chinese or mostly Chinese with a few English phrases thrown in. I got to meet a few of the students from SJTU as well. It was such a fun night. 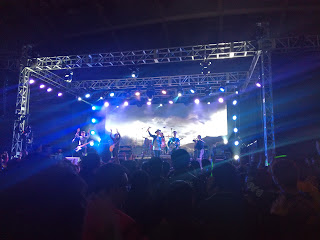 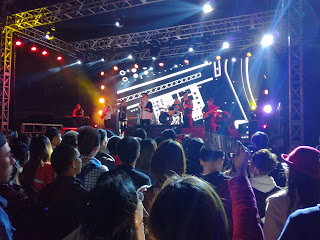 The Chinese language program at NYU Shanghai does weekly language/culture activities to learn vocabulary on different topics, and we get extra credit if we go to enough of them. This week's activity was learning how to play Mahjong (麻將), the non-gambling version of course, haha. The pieces are kind of like dominoes but the game play was close to some American games I've played, like Phase 10 and Rummikub, where you try to get sets of the same number or runs of numbers in order. There were way too many people and only one set of Mahjong, so were were on teams of four, which meant I could mostly sit back, watch, and learn. 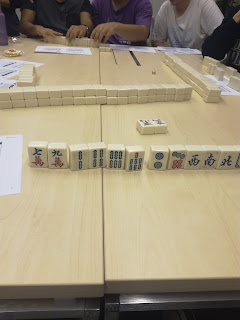 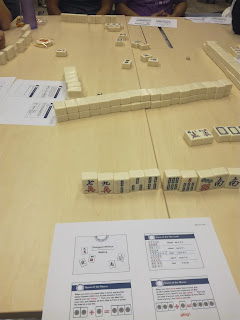 My roommate's dad was in town this weekend (he works in Beijing), so he took us out to a nice Chinese seafood restaurant. I had warm taro juice for the first time, though not my first time having taro. It has such a fun purple color and tastes sweet and potato-ish. Also had squid, pigeon, crab, shrimp, and various other dishes. I love the Chinese dining style of sharing everything on the rotating circle in the center. 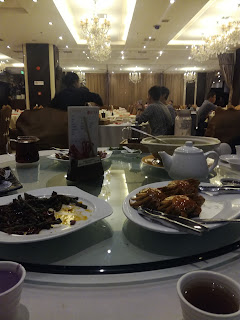 I'm not much for fancy food, and so I had no idea how to eat most of the seafood there, let alone how to eat hard-shelled seafood with chopsticks. My roommate's dad saw my struggles and gave me a tutorial on how to open a crab (with my roommate's translations). For some reason he asked me to video it and really enjoyed being filmed, so I'll include it here for your education, haha.
I don't really understand the point of eating food like crabs that take so much work to obtain so little meat, but it was quite good when a bit of rice vinegar was poured into the hollow crab body to mix with the meat.

Anyway, I guess I got doubly lucky with dinners this week, because this Sunday a few American families from church invited me over for an early Thanksgiving! I was so so thankful and they managed to make all the traditional things: turkey, cranberry sauce, green beans, sweet potatoes, rolls, mashed potatoes and gravy, and at least 5 different pies. I was SO full by the end of it, but I guess that's kind of the point of Thanksgiving. A lot of the American families here have college-age children studying back in the U.S., so they seem to like to invite me places because they tell me I remind them of their adult children. Fun times.

What am I thankful for this Thanksgiving week? So many things. I'll make a list of a few that come to mind:
Love from Shanghai,