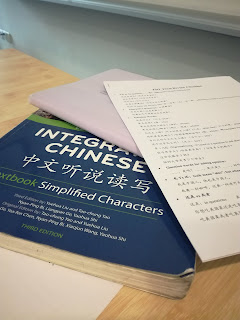 I spent most of this week doing schoolwork in preparation for final exams, which is kind of the way it goes this time of the semester. I'm enjoying it for the most part, though. It's just not the most exciting to write about. For my interaction lab class, we have a pretty open-ended final project, to build an interactive art piece/game/ device with Arduino circuits and Processing animations. I spent most of my weekend coding, testing the sensors, debugging everything, etc. It's more fun than studying for final exams, but it's so time-consuming. I feel like I spent the entire weekend in the lab. Next week, I'll probably add some pictures of the project once it's done.

I'm also studying for Chinese. In addition to the typical written final exam with listening, reading, writing, and grammar, we have a speaking final exam where we are interviewed by our teacher from a predetermined list of questions, and then we have to give a 2-minute monologue in Chinese on one of two possible topics.

For Contemporary Chinese Political Thought, I'm writing a final essay on the Chinese public education system and the political systems underlying its curriculum. The math classes have final exams as well.

The stationery store near my apartment was having a sale, so I got this cute little journal that has square boxes for writing characters, instead of just lines, so it's perfect for practicing vocab. 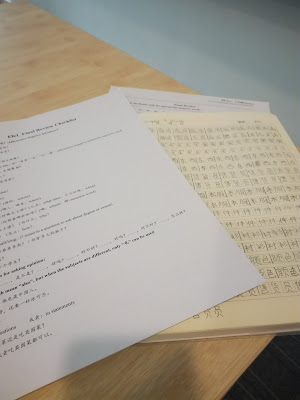 This is the building where church is. Not sure how much you can tell from this photo, but it has been pretty smoggy and grey outside this week, which kind of suits the end-of-semester mood. We did the Christmas program at church this week, though, because a lot of people at church here are expats who go to their home countries or travel for the holidays, so very few people are going to actually be around on Christmas day. It was so nice to listen to all the music performances of Christmas songs and feel the magic of the season. I played the piano for the choir in one of the songs. 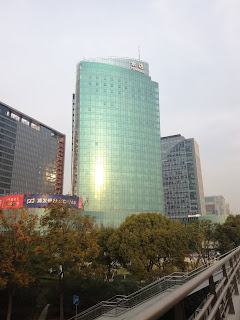 I went grocery shopping this week, as I usually do. I've mentioned before how there's a section of the grocery store with live fish, frogs, crabs, etc. for people to purchase for cooking. This time, there was a person buying fish when I walked past that section, so I got a nice view of one of the store workers scooping these fish out of the tank and putting them into a net. The fish were flopping and splashing everywhere, and I guess it's just not something I'd normally see in a grocery store back home. 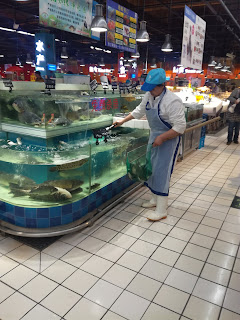 I can't believe that I only have two weeks left in Shanghai. This semester went by so quickly and the "goodbyes" are starting.  I guess that's one of the downsides to moving around so much- I have people all over the world to miss! Anyway, I'll sign off for now. Hope you are all staying happy and healthy.