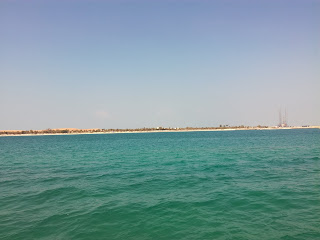 This week one of the Emirati students from school organized an event inviting students to have dinner at his home and learn more about Emirati culture. As an international student/ expat, it can sometimes be difficult to really experience Emirati culture while here, because the population of the U.A.E. is 80% non-citizens, and the NYUAD campus is such an international community, and because I don't speak Arabic (sadly...) so it can be hard to integrate into the Arabic-speaking social circles even though English is so widely used here. Therefore, I try to take advantage of these kind of events whenever I can. Even though I've lived in the U.A.E. for about a year in total, it was my first time going to an Emirati house.

It was an absolutely beautiful place! I didn't take a lot of pictures because I figured as a guest it might be kind of weird to take photos of someone else's house and put them on the internet. I'll let you use your imagination though: it was a well-decorated, spacious home with chandeliers in each room, gold-colored curtains, soft carpets, wooden archways with geometric patterns, a swimming pool outside, etc. We ate dinner in the majlis room, an area separate from the rest of the house where we sat on the floor around a low table. We then headed to the main part of the house for after-dinner conversation and dessert. I thought I'd at least get a photo of the dessert table: 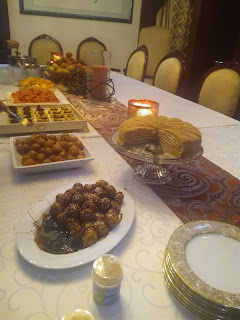 For dinner, there was SO much delicious food... mostly huge platters of rice, chicken, and lamb with different spices (Google search machboos to get an idea). Then for dessert there were dates, luqaimat, fruit, cake, and more. His parents were such hospitable and down-to-earth people, and it was fun to get to meet some of the freshman students that I haven't met before.

Also, there was an open mic night this weekend, and I had so much schoolwork to do, but it's hard for me to resist live music, so I stopped by for about an hour and watched some really interesting and amazing performances by my classmates. The NYUAD campus has two main cafeterias, but one of them isn't used very often- it's more of a backup one for when the main one is under maintenance, or a place to have smaller events. Lately, they've been redesigning the second cafeteria into a student social space, and so the open mic was held there in the cafeteria. They made it so cozy though, with benches and beanbag chairs on the floor. I love the community feeling here, with so many inside jokes during the open mic night. Also, we got free pizza from the new pizza restaurant that opened recently on campus, which was pretty great. 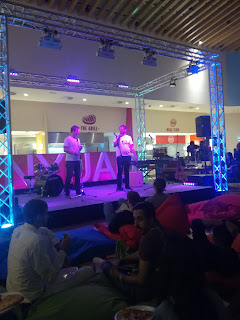 Other than that, I've kind of been on a self-improvement kick lately, trying to exercise and eat healthy and improve self-discipline/ time management, so hopefully those efforts don't fall apart during next week's exams. Some of my classes this semester are only 7 weeks (half-semester), so that means we have midterm exams for them next week. I'm still trying to learn Chinese when I have time; I found a few YouTube channels with helpful conversations and music to supplement my regular vocab memorization.

I spent around 6 hours the other night figuring out how to do 2 questions of my circuits homework, so that was pretty painful. Lots of long homework assignments in preparation for midterms. It can be SO frustrating, but I guess it's part of learning how to study for these kind of problem-solving-based classes. That being said, my homework this week for Digital Logic was kind of fun. We had a bunch of questions asking to prove equations with Boolean algebra, and they're kind of like little logic puzzles... figuring out which identities to use and in which order to get what you want.

Another cool thing that happened this week, if you've been reading the news, was the successful SpaceX Falcon Heavy rocket launch. The NYUAD Engineering Design Studio had a live screening on Tuesday night so that students could watch the launch unfold. I haven't really gotten a chance yet to really read through the details other than skimming a few news articles, but it's exciting to think about possibilities for the future of human space travel in our lifetimes. The U.A.E. has been working on its space program, as well. Sometimes I think about whether I would want to go to colonize Mars, if I hypothetically had the opportunity. A few years ago, I think I would have been a little more unsure about it, and I'm sure my answer would change in the future if/when I have my own children, but if I had to decide right now, I would definitely go, hands down. So much to learn, plus the opportunity to have such a profound impact on the entirety of humanity...  plus the sense of adventure, of course. One can dream...

"I love the thought of a car drifting apparently endlessly through space and perhaps being discovered by an alien race millions of years in the future."
- Elon Musk, when asked why he launched a Tesla into space

I found this in one of the women's bathrooms on campus and thought it was cute: "Warning: images in this mirror may be distorted by socially constructed ideas of beauty," surrounded by a bunch of affirming quotes on post-its. Shoutout to whoever took the time to do this. 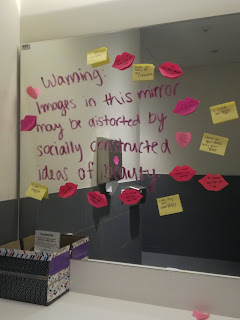 Anyway, sending my love to all.