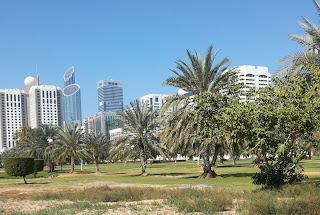 I also got to see one of my friends perform in a poetry/open mic event at Umm al Emarat Park hosted by Echoes Abu Dhabi. I love poetry events in the U.A.E. so much because you get such a diverse range of voices and experiences. You get a lot of really cool poetry about heritage, love/heartbreak, oppression, immigrant stories, etc. Performers were from Zimbabwe, Pakistan, the Philippines, Somalia, Egypt, India, Australia, and more. It was a pretty small event, small enough that the music/poetry wasn't really anything exceptional in quality, but it didn't matter because the important thing was making a space to share. The food truck outside this park is a favorite of mine as well. Happy to get a chance to cross the lines that divide "art/music/literature people" from "math/science/engineering people" ... why can't we do it all? 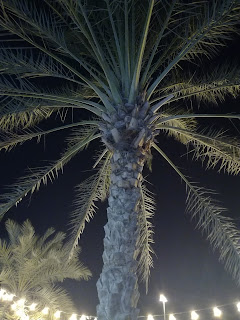 Yesterday I got to volunteer playing sports with some migrant worker women from the Philippines and Nepal who live in Abu Dhabi. We did some basic fitness training first, then did zumba and played badminton. I haven't really done anything related to team sports in forever, partly because I usually get so competitive that it stops being fun unless I put a lot of time into it, but as a volunteering thing it was so much fun, and the women said they enjoyed it as well. We were all pretty terrible at the actual sports but that made it fun, because we spent more time laughing at our missed serves/ hits than keeping track of the actual rules. Their smiles and hugs made my weekend. It made me think about how we can cultivate those "universal language" things, the kind of activities that work for cross-cultural communication and breaking of social barriers. I've already seen the power of art, mathematics/science, and music as "universal languages" that create communities, but I hadn't internalized before how sports can also be such a cross-cultural bonding experience. Once the rules are established, you don't even really have to speak the same language to play, because the language of the sport becomes a common ground. Something to think about.

Circuits lab this week involved building a capacitor out of paper and aluminum foil, so that was fun. At the beginning of the semester, I was really nervous about my Complex Variables class, but it has been getting relatively easier to understand, while Circuits has been getting harder to understand, at least for me. The professor can definitely make or break a math class, and my Complex Variables professor is pretty knowledgeable in his explanations, so that's a blessing.

Today I went shopping for some things and ended up walking around the city for a while. Trying to get outside more while the weather isn't too hot-- but in the middle of the day it was definitely getting warm enough to break a sweat while just walking. Summer is coming! Funny realization shopping at Lulu's Hypermarket (U.A.E. equivalent of Walmart), I was buying bobby pins for hair and the lightest color I could find was a medium-dark brown. I guess even with all the diversity here, there's not enough demand for blonde bobby pins to stock them at Lulu's, haha. 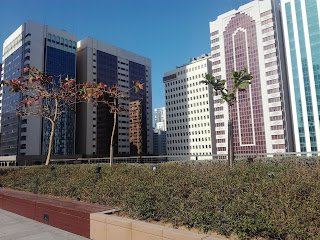 I've been watching the news on the Florida school shooting. Heartbreaking stuff. Lately I much prefer to discuss political issues in person, but I will say that it's ridiculous that gun violence continues to be such an issue in the U.S. compared to other countries. It's ridiculous that civilians, 19-year-old civilians at that, are able to legally purchase these kind of assault weapons. I'm also worried by the increasing frequency of mental illnesses and also just general loneliness/ uneasiness / inability to productively cope with stress that seems to be part of my generation in the U.S. However, I'm finding it encouraging that many people are emphasizing the need for political reform, whatever their preferred action to address the issue may be. Hoping that changes are made this time around.

Anyway, since this week didn't really have any unusual adventures, I want to share a story that has randomly been on my mind. Sorry it's long. I hope it doesn't come across as bragging or self-important or whatever, because that's not my intent in sharing it. So, a few years back, I played the piano for a little week-long children's choir camp. It was a pretty small, casual thing, but at the end we had a performance for the parents to watch their children sing the songs we had learned. For one of the songs we were teaching the children, “Glorious" by David Archuleta (here's a link to the amazing One Voice children's choir version), the director wanted to use a pre-recorded soundtrack that had other instruments in it, and so I was supposed to just play the piano for the rehearsals and not for the final performance. At the time, I was a little bit disappointed by this, because I really loved the piano part (if you listen to the version above, you'll see why). So, even though I knew that I would only need it for rehearsals, I practiced it fully anyway.

Partway through the final performance, the sound system started cutting out, due to technical difficulties, and eventually the soundtrack stopped completely. The kids just kept singing, as they had been told to do, and I quietly left my place, sat down at the piano, and flipped to the page of the music where they were at. At the start of the next verse, I came in on piano, to everyone's surprise, and played until the end of the song. After the performance, this random lady that I had never met came up to me and, along with the typical congratulations and compliments, said something to the effect of "What you did today will be a metaphor for your life. You are going to be there when other things fall through." Her words stayed with me. Since then, I've incorporated that into my life philosophy, to try to learn the skills and make the connections to fill in the gaps and be where I am needed when it counts. I know it sounds vague, but I think I'm starting to see that fall into place recently. Even when I struggle, even though I'm so very far from where I'd like to be, I see little ways that the skills I'm learning are starting to come together. Even though my future could go a million different directions, I keep finding little experiences that put me in positions to learn things that become useful later on, in ways I hadn't necessarily imagined. It's interesting. It's hard to keep that same sincerity of intent alive when the days become stressful and tiring and monotonous, but as long as I come back to that place of trying to maximize my usefulness to the world, it helps.

Anyway, hope you all are staying happy and healthy. Goodnight from Saadiyat Island!