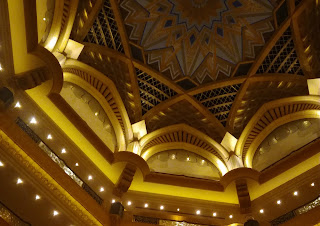 Emirates Palace is an extremely extravagant and upscale hotel, with a theatre inside. Everything is gold, so much that everyone glows a bit yellow in the reflection from the walls and ceilings. 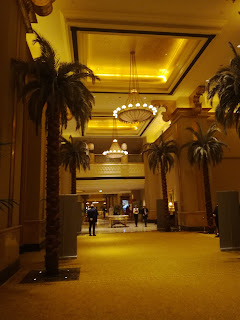 There are palm trees indoors, and display cases of jewelry, perfumes, oils, etc. from around the world. Photos don't do it justice. Other than maybe the Grand Mosque, it's probably the most extravagantly decorated building I've visited. Apologies for the photo overload to come! 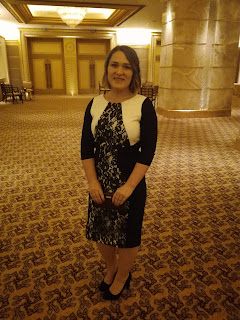 The last time I went to Emirates Palace was two years ago, when I came for the Candidate Weekend final dinner when being considered for admission to NYUAD. That was the fanciest meal ever, with tarts for dessert that had edible gold flakes on them. Good memories, yet I always feel a bit guilty about being at these kind of places because I start thinking about how the money could be redistributed for better social welfare. 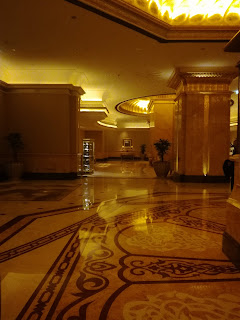 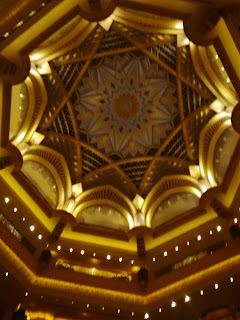 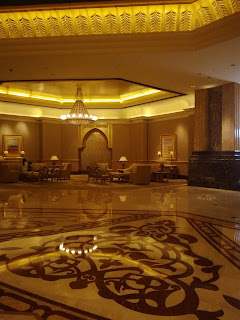 In the waiting period before the concert, some friends and I walked around the garden areas outside, where there are some sculptures and little gazebos scattered across the lawn. 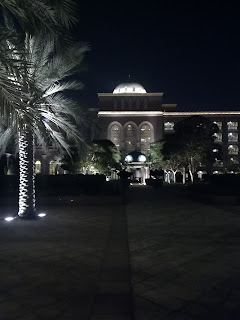 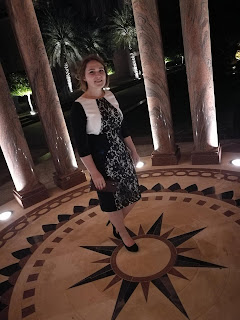 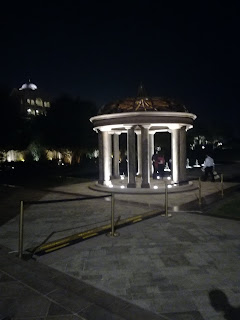 Classes are pretty tough right now, for all of us, but I'm doing my best, and I guess that's all anyone can ask for. In circuits lab, we built an inductor from PVC pipe and wire, and I was pretty proud of myself because part of it involved cutting grooves into the PVC pipe with a hand saw, and I was the only female in the group, and I ended up doing most of the hands-on work with tools. I happened to be the only person in my group who had used a PVC pipe cutter before and immediately knew what it was for (thanks, Dad, for letting me help fix the sprinkler system as a kid). I definitely still have room for improvement in understanding the problem solving/ theory of circuits, but I'll take what I can get.

I was also fortunate to be chosen to participate in an event this weekend called "24X", sponsored by the NYUAD interactive media department. Basically the idea is to take 10 students (that's the "X"), from different disciplines, and pair them in groups of two, and give them 24 hours to make a project on a given theme. It's not a competition, it's not judged, and there are essentially no requirements in terms of what you have to accomplish. It can be arts-related, technology-related, anything goes. It's just kind of an experiment to see what you can create in 24 hours. 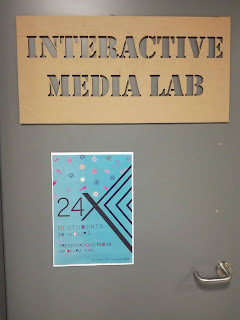 It was such an interesting experience and so much fun. I was paired with a junior guy from India who is majoring in Social Research and Public Policy, and the theme was "Reimagining Time". We were given two mentor professors, also from different backgrounds, and were given free reign to use the Interactive Media lab equipment and consult with the professors and lab assistants there. After a ton of time spent brainstorming, discussing with mentors, and analyzing Time more than we ever thought imaginable, we came up with a project idea. 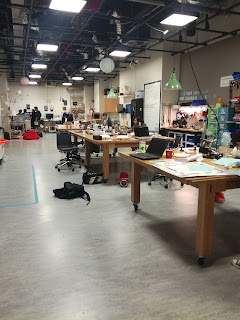 Given the theme of "reimagining time", we first wanted to do something in virtual reality with the idea of "time flies", and create some sort of VR landscape that involves flying. However, one thing I've learned from my engineering professors again and again is that it's important to have a solid underlying concept to a project first, then choose the appropriate technology to implement the project, rather than gravitating toward a certain technology because it's "cool" or "high-tech" and then wasting resources on a meaningless project. Also, we had to consider the fact that it's pretty difficult to make anything worthwhile in VR in just 24 hours without being very experienced, and neither of us had nearly as much experience with VR as we would have liked.

So, after getting rid of the VR idea, we decided to reimagine time in terms of what it would be like if the same aging and decay process that affects physical objects also impacted our digital footprint. As a sort of concept exploration/social commentary, we created a prototype social media webpage where, the older the posts are, the more they "decay". As you scroll down the timeline, the text begins to fade, and the photos become pixelated and the pixels start to fall down and distort as though the photos are breaking apart. Luckily my partner had some experience with web development, because my experience with HTML/CSS for websites is pretty limited. This blog doesn't really count as web design because I mostly just use the default Google template; I don't really code anything for it myself. I learned a lot of new things from this project that will be useful in the future, though! I also did the image animations/ pixelating effect in Processing, which is something I've used often before. If you're curious about the technical details, you can download Processing for free, and there's a really great YouTube tutorial here that shows something similar to what I was working on. 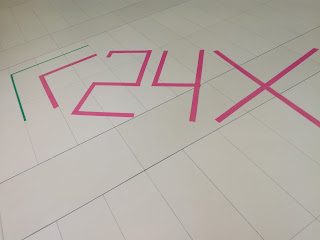 So yeah, other than going to church, I spent most of this weekend coding, writing website content, designing a logo, and discussing ideas. By the end, we created a mission statement for the website, which was mainly to raise interesting questions about how the digital world affects our perceptions of time. For example, how does the content of our social media posts change when they are temporary vs. when we expect them to last forever? How does social media allow us to "immortalize" a version of ourselves that doesn't necessarily reflect reality? Who owns the rights to our digital footprint information after we die, and it is ethical for social media corporations control this information essentially forever? Interesting stuff to think about, and even though the website wasn't anything super exceptional, I'm really proud of what we accomplished in our 24 hours.

At the end, we gave a presentation of our work and got to see the other 4 projects as well. It was so fun to see the completely different directions that each group took the theme. One group made a sort of collage/mixed media art piece related to memories, another made a video game where the different characters experience time differently, another made an interactive anatomical heart sculpture complete with a heart rate sensor and corresponding light and sound outputs, and the other made a board game exploring the concept of "time = money" and how we decide to spend our time.

As I mentioned to a few people earlier... I'm probably about to have a sort of "24 hours round 2" in order to catch up on the schoolwork that I should have done over the course of this weekend. But, you know, sometimes these kind of events are so worth it--to have a project to add to my portfolio/resume, to make friends and valuable connections with professors, and to break up the regular routine and stimulate innovation by focusing on something new. In a world where our attention is always divided between a million things, there's something really rewarding and refreshing about dropping everything to focus solely on one project.

Another interesting thing worth mentioning is that there's a fitness instructor here at NYUAD named Eva Clarke, and I go to her class sometimes, at least I've been trying to make it to her class once a week and I've been doing relatively alright at making it happen this semester. Her class does mostly high-intensity interval training and bootcamp-style workouts. Anyway, this lady is seriously incredible, because prior to today she held 11 fitness-related Guiness World Records, and today she set 5 more, right here in the NYUAD gym.  All records are the most in the world (for a female), and they were: most pull-ups in one minute (37), most chest-to-floor burpees in one minute (31), most burpees in one minute (38), most burpees in 12 hours (4785), and most burpees in 24 hours (5555). If you don't know what a burpee is, see here. I wasn't able to go see her do it because of everything else going on this weekend, but some of my classmates did, and some even pledged to do a certain number of burpees to support her. I kind of think anyone who signs up to do burpees for 24 hours is certifiably insane, but it makes me grateful that, as a student, I can just go and take fitness classes for free with someone who can do something like that. So much respect.

Anyway, hope you all have a fantastic week!